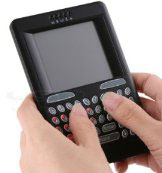 My remote keyboard with a touchpad arrived in the mail today.  Having played with it a little bit, I’m impressed.  The negatives are that it’s a little lighter and cheaper feeling than I thought it would be and the touchpad could be a bit faster/more sensitive.  It’s about the size of a calculator, so you’re not going to want to write a paper with those tiny keys, but (the pros) it’s about the size of a calculator.  It’s not big and unwieldy like most remote keyboards are, so it’s perfect for what Amanda and I want to use it for, which is to sit on the couch and control the computer.  It’s got an optional backlight for the keys, which is perfect if you’re using it in the dark or near-dark.  For under $30, I’d say it was a good buy.

As a side note, when I opened the remote keyboard up I commented about how little it was.  My 20-month-old daughter was really intrigued by it and started calling it a “little.”  When she picked it up she held it up to her ear and started babbling, thinking it was a phone.  It was all very cute.

A more important development though is that it looks like I’ve got a solution to the TV tuner and HDMI card problem that arose a couple days ago.

One of the first things in my email every morning is a daily newsletter listing specials from Buy.com and right in the subject line this morning was exactly what I was looking for: a $100 computer. 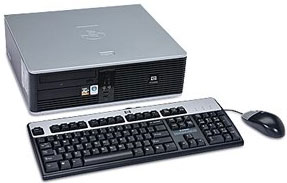 The computer in question is an HP Compaq DC5750.  Its main purpose is as a work computer, but the only thing it was missing from what I need in a computer to run my media center is a decent card, and what do you know, I’ve got one sitting in a box in my living room that also has an HDMI output and a TV tuner.

The first thing I did was to make sure it had the PCI slot I need (a PCI-E x16), which is did.  Then I read some reviews, all of which were overall positive.  Then I bought one.  I’m glad I went ahead and jumped on it because they were all sold out an hour or so after I did it.

It’ll fit real nicely.  It’s made to lay down and is almost the exact same size as our current cable box, though it’s a little taller.  Still, we’ll have plenty of room for it in our entertainment center.

I’m very excited and can’t wait for it to get here in about a week!