Bundled Up in Spring Weather

Bundled Up in Spring Weather 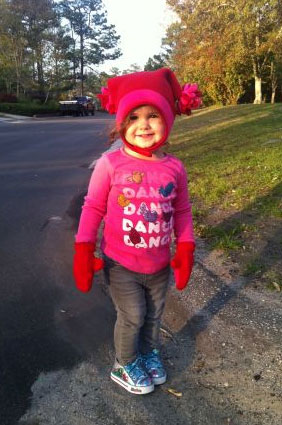 Milly and I walked to the store this morning.  Well, I walked and she rode in the wagon.  We were getting a few things while we were there, so I preferred that she not walk today.  She kept herself entertained this morning and I got a lot done, but she was a little needier this afternoon.

After I finished working, Amanda, Milly and I went for a walk.  Milly insisted on wearing her toboggan and mittens for some reason.  She would hardly wear them in the winter, so when it’s 70 degrees outside she decides it’s time to wear them?  Okay.

Whatever, it was really cute.  What was less cute, however, was when she wanted to sit on my shoulders then Amanda’s after severely wetting her pants.  Yeah, we took showers when we got home.

Amanda and I played a game of Carcassonne and a game of Dominion (with Intrigue cards only) after we put Milly to bed.  Amanda won both, though she complained throughout most of the game of Carcassonne because she thought I was playing dirty.  Dominion was a close one.  I really like the random selection of cards we played with.

After that I watched the NCAA championship game.  Bleh.

Milly was very informative both times I got her out of her crib today.  This morning she was pointing at a bunch of things and naming them, like the light coming in under the curtains.  She also named every capital letter on a signpost painted on a wall in her room.

This afternoon when I went to get her up she informed me of something I knew as soon as I walked into the room anyway, which was, “Mimi poo.”

She was really cure when Amanda got home.  She was very excited when Amanda walked in the door, then she went towards the TV to watch a video that was on.  Amanda knelt down and asked her for a hug, and Milly turned around and said, “Oh, hi!” then gave her a hug, as if she had just realized that her mother was there.