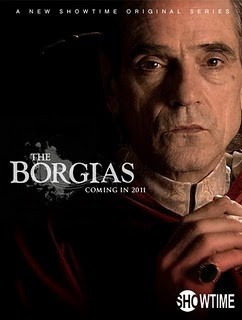 There’s a genre of television that seems to be gaining popularity these days, and it is the graphic period piece.  This is often set in pre-Columbian times, has a good bit of violence and sex and generally has very high production values.  Rome was one of these, and I loved that show.  Camelot is a new one, and I watched the first two episodes of that.  I really like it.  The Borgias is another one that I watched the first two episodes of (or one long episode, I’m not sure) that was also very well done.  Game of Thrones is one that starts soon and is basically the same thing, but it’s set in a fantasy world.

What’s great about the three of these being on is that when I watched shows like Rome or Deadwood (which I guess counts, even though it was set in the Wild West), I couldn’t get enough of them.  Now I’ll have three to watch at once, so hopefully that will sate my appetite.  If it doesn’t, I can stream the two seasons of Spartacus through Netflix.  Spartacus seems like the poor man’s Rome in that the sex and violence are gratuitous to the point that you almost wonder if they’re using the story of the Roman slave revolt leader just as an excuse to have all the blood and boobs, but it still fits within the genre.  Sure, the CG isn’t very good, particularly the over-the-top blood every time a fight breaks out, but it’s about ancient Rome, and, outside of the CG blood and CG sets, the rest of it is well enough produced.  I’ve only watched one episode of that so far.

For the first time in what seems like a long while, Milly went down for her first nap before 10:00.  She wasn’t in a particularly bad mood, but she kept saying she wanted something then would change her mind and say she wanted something else.  Like I’d get some yogurt out for her then she’d say she wanted oatmeal, then I’d fix oatmeal and she didn’t want that anymore.  That was a bit bothersome, but livable.  (She did eat the oatmeal.)  I finally did put her down after she melted down because she couldn’t close the office door because the pull-up bar was in the doorway.  She was pretty good the rest of the day though, I think.  Amanda took her to the mall this afternoon and I didn’t see them for a while.

I can’t remember if I mentioned it a few days ago or not, and I’m too lazy to check, but Amanda dyed her hair to get rid of all the white hairs, but the dye didn’t cover it all so she decided to try another dye today.  That didn’t get them all either, and that one specifically said it was for removing gray hairs.  What’s up with that?

Totally switching gears, small group was really good tonight.  I won’t go into any particular details, but it’s always a big deal when someone is able to drop a facade and share their struggles, even if all we can do is to pray for them.