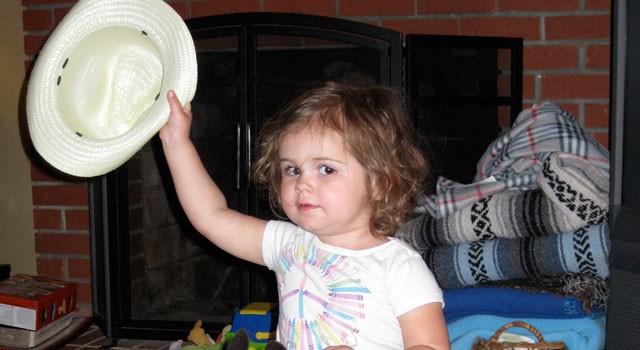 I beat Assassin’s Creed Brotherhood last night.  I didn’t realize I was starting the end of the game when I did though, and there were a few more things I wanted to finish on it before I ended it.  Fortunately you have the ability to go back into the game once it’s finished.

Milly’s gotten to where she likes playing in her room without the light on first thing after getting up in the morning. No biggie, but I thought I’d mention it. She mostly just throws some bouncy balls around.

Work flowed pretty smoothly today, even though Milly didn’t go down for her nap until almost noon. I really need to get an assistant.  I tried interesting her in The Land Before Time on Netflix, but she was too distracted running up and down the hallway. She did ask for Lilo & Stitch a little later though, and she didn’t melt down at the end of it.

Amanda spent a lot of the day making cookies.  Later on she took Milly to Hugh MacRae Park, where she met up with Stephanie and Jacob.  Ogden Park is much closer, but Amanda likes Hugh Macrae better.  She said that Milly went down the slide  all on her own today, with no coaxing or anything.

I was finishing work when they came home. I had actually just received an email about doing a website for Nolan Smith, which I was really amped about. Just before that, the other people who worked on his Player of the Year site and I had discussed how much we liked working together and were throwing out ideas for other things to do. Very exciting stuff!

I didn’t have long to dwell or scheme on it though because Amanda and I had to drop Milly off at Nick and Amy’s so we could go to an advocate meeting at church. There was a taco bar for dinner with lots of very nice desserts. The talk of the night was prayer, which was a bit of a gut check for me. I think it could lead to some really good discussion in our small group.

We headed back to the Warkentiens’ after that.  Milly greeted me and Amanda with, “Hi guys!” which is something she seems to have picked up lately.  She was also so excited to see us that she almost scooted herself off her her chair in a way that she would have fallen off of it.  Anyway, they told us that she had eaten well and she had played nicely with Eli, who hadn’t been up too long, as well as the rest of them: Nick, Amy, Amy’s sister Andrea and her husband Jerry.

We put the kids down to bed shortly thereafter.  Milly, as she usually does when she’s going to bed someplace besides her home, was distraught for five or ten minutes, but she eventually settled down.

We introduced Jerry and Andrea to the game of San Juan (which I won) then played a game of Dominion with Intrigue cards mixed in (which I lost). Neither game is made for six players and we ran out of cards playing San Juan.

Milly was pretty friendly, giving hugs and kisses to everybody, when we got her up at almost 1:00 to head home and she was talkative heading into the house, wondering where the stars had gone on this cloudy night.  When we got upstairs, Milly tossed herself down in her usual diaper changing spot. I changed her, Amanda and I told her good night and she went right down.

Our night was not over though, as Amanda had discovered before we left the house that Cobb had puked on the foot board of the bed.  We didn’t have time to clean it then, so I did it before getting in bed.  It had actually slipped down between the board and the mattress and got on the duvet cover some.

That was a bit annoying, but also annoying was the fact that I couldn’t find Bruce.  That wouldn’t be a big deal, but if he’s not in bed he scratches at the bed and pulls on the sheets with his mouth until someone puts him in.  Since Amanda sleeps on that side of the bed, that duty always falls to her, so I thought I’d be nice and try to find him.

Well, I did eventually find Bruce under the bed and got him to come out, but almost as if he were spiting my efforts, he kept jumping out of bed for a while.