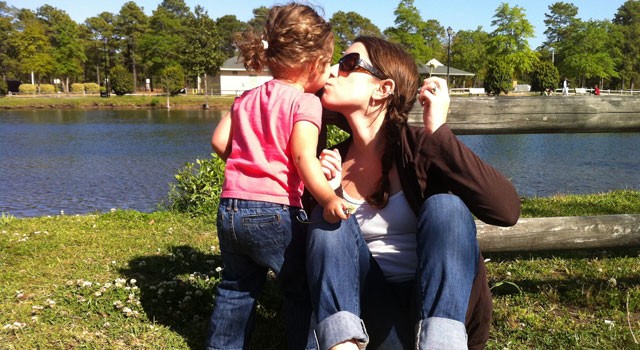 On Sundays, Amanda is almost always the first to get up because she takes longer getting ready.  She’ll usually wake me up after she gets out of the shower then I’ll get Milly up once I’m done then we aim to leave the house for church at 8:10.  This all usually starts at 7:15.

Today Amanda woke up at 8:00.  She’d woken up but had fallen back asleep.  Oops.  We decided to go ahead and get ready and we were out the door in 20 minutes.  Sure, it was more stressful then usual, but maybe we should take a look at our early Sunday morning time efficiency.

Milly was absolutely adorable this morning, by the way.  She wore a green floral dress that Renee, my brother Adam’s girlfriend, had gotten for her last year.  Everywhere we went I heard people say how cure it was.

Church was really good today.  The description that popped into my head when we were leaving was that my heart just felt very full.

This isn’t really related to that, but during the announcements Chris Kuhne mentioned these things they had for people to fill out about one person who moved you and impacted your relationship with God.  I don’t know why I hadn’t thought of it before, but when the next song started up I had to excuse myself and told Amanda I’d be right back.  I wanted to make sure I did it while I was thinking about it.

When I got back Amanda asked where I’d gone, so I told her.  She asked who I put, and I said, “You.”

After church we went to Atlanta Bread then walked over to Barnes & Noble, as usual.  Amanda picked up Toddler Wise and, flipping through it, said she wished she’d picked it up earlier.  Baby Wise did some great things for us, so we’re looking forward to Toddler Wise‘s input.  She read some of the topics to me, and I think I’ll read them some myself.

Speaking of all that, while Milly was certainly fun some today, she was also in quite a mood.  I guess she isn’t getting enough sleep lately or something, because she was tired (like, meltdown-tired) on our way back home from Mayfaire and she melted down again after we went to Ogden Park this afternoon.  We almost put her down to bed an hour and a half early because she was just not happy about anything.

The park was fun though.  Milly spent time running up and down the ramp to the bleachers and went down a few slides on her own.  We also swung in the swings (the big and little ones), smelled some flowers and hung out by the pond.  Every now and then we’d see some jets from the air show fly by.

On a related note, apparently there is no playground at Olsen Park, which is a pretty new park right up the road from us.  We drove up there before heading over to Ogden Park to check it out, and all we found were athletic fields.

Amanda and I played Stone Age a few more times today.  I won two out of three again.  Amanda kicked my butt pretty bad at one where we both thought I was going to win and I won one that I was pretty sure she was going to win.  We’re definitely settling into our own strategies, it seems.

Here’s a question for you: How often do you see two TV shows in one night where someone is peeling an apple slice with a knife?  I saw it happen in 30 Rock and Camelot.  It made me want to get an apple and cut slices with a knife, so I did.

Amanda decided to spray paint our picnic table (made by her dad) today, but I guess it was still somewhat wet because the paint mostly just soaked right into it.  She’s going to try again later.