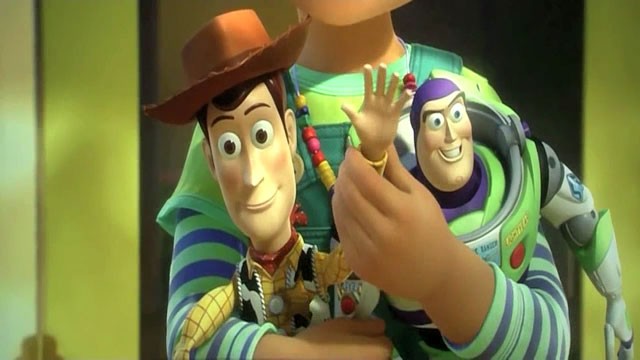 For years I’ve convinced my wife that I was dead inside, evidenced by the fact that I wouldn’t ever cry or show any sad emotion during a movie.  I don’t know why, but I decided that today was going to be the day that I told Amanda the truth.

Warning: there are some movie spoilers below.

The truth is, my faithful readers, that I get emotional during all kinds of movies.  You want a list of a few off the top of my head?  Forrest Gump.  Glory.  Saving Private Ryan.  Big Fish.  The Notebook.  Yes, I said The Notebook.  There are others, for sure.  Pretty much any movie where you spend time in someone’s life and you see them move on, whether it’s a kid going on to a new stage of life (college, marriage) or someone moving past life entirely, those tend to get to me.

Lately, it’s been Up and Toy Story 3.  Up isn’t having the impact on me that it did the first couple times I watched it because Milly has wanted to watch it so much lately that it’s sort of lost a bit of its sting.  That said, if you’re not moved by the first act of Up, there’s something wrong with you.

And then there’s Toy Story 3.  Now, I know I admitted to having to hold back some waterworks a couple weeks ago, but that wasn’t the whole story.  I’ll tell you about the three times I’ve watched the entirety of Toy Story 3, but first I have to tell you about the ending.  If you haven’t seen it, don’t read any further.

I won’t go into the whole rest of the movie, which has its emotional ups and downs, but the final few scenes are what really set you off.  It starts when the toys are struggling through a mass of debris at a dump, sliding inevitably towards a giant fire that is going to melt them down with all the trash that surrounds them.  You know it’s a Disney movie.  You know they’ll survive.  But they give up.  They accept their doom.  They reach out to each other, holding hands and closing their eyes against the end they know is coming.  The emotion is just portrayed in such a lifelike way that you can’t help but feel anxious and afraid with them.  You can’t help but think of all the things they’ve gone through, what a family they’ve been to each other, only to end up here, about to get burned up with garbage.

After they’ve survived that and made it back home, the next scene shows Woody saying his goodbyes to the rest of the toys as they get ready for their life in the attic and Woody gets ready to leave for college with Andy.  That’s not so bad, but then Andy’s mom comes in and looks at the empty room where her son grew up.  And now he’s leaving, going off to college.  Anyone who has left their family or who has had their kid leave for college knows how rough that can be.

Now that our emotions have been built up some, the final scene of the movie swoops in for the kill.  Andy takes his toys to Bonnie to pass them on to someone who will play with them and love them as much as he did.  It’s hard to keep your eyes dry when he goes through each toy and introduces them to her, but then it gets worse when he sees that somehow Woody is in the box, and he has to decide whether to hang onto his favorite toy or let go and grow up.  The other hard part about this part is that it means Woody has finally chosen to let go of Andy.

Andy does end up giving Woody to Bonnie, but he stays and plays with her and his old toys one last time.  It’s so bittersweet, because at the beginning of the movie the toys were desperate for any attention he might give them, and here he is, passing the torch and having one last hurrah.

And then there’s the coup de grace.  Andy’s getting back into his car and Bonnie and all the toys are on the front steps of Bonnie’s house.  He waves goodbye, then Bonnie waves goodbye with Woody’s hand.  Seriously, I know Amanda used to joke that I was dead inside, but if you’ve seen the other Toy Story movies or you had any favorite toys growing up, there’s no way your eyes can be dry at that point.

I asked my friend Jason if he had ever seen the movie today.  He said he’d half-watched it with his niece, Olivia, so, not knowing how much attention he had paid to the end of it, I started talking about it, pretty much like I wrote above.  He said he didn’t think he’d go back and watch it now because that would be too tough to take.

So, on to the three times I’ve watched Toy Story 3.  The first time, I had no idea this was all coming.  Amanda was wiping her eyes and I was doing all I could to blink back tears.  I think I may have sneaked in a wipe while making sure Amanda wasn’t watching.  I read online that a lot of people were glad they went to see it in 3D because they were able to hide behind the 3D glasses.

The second time I watched it, I knew what was coming, which actually made it harder.  When I realized I wasn’t going to be able to stop myself from blubbering like a baby I picked up my iPhone and pretended to be looking at something there so I wouldn’t have to watch.  That helped.

Today I was watching it again, just me with my almost-two year old girl sitting in my lap.  I told myself I was just going to face it and see what happened.  I literally had a stream of tears running down both of my cheeks.  I wasn’t sobbing or anything like that, but the waterworks were definitely flowing.

So anyway, yes, I confessed to my wife today that I am not, in fact, dead inside and that if anything, I’m actually a little over-sensitive.  Only took me about seven years to do that.