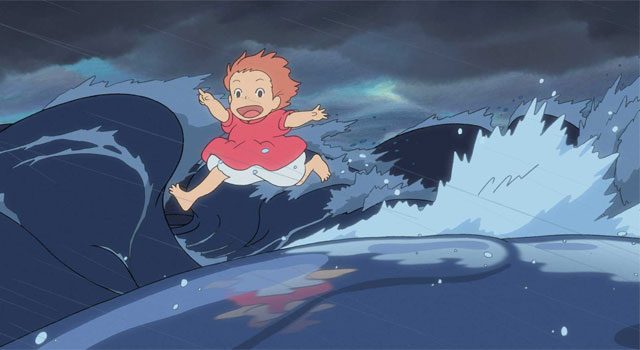 I let Milly sleep in until about 8:45 this morning.  She’s been cranky the past few days, so I figured she could use the extra sleep, if she wanted it.  And apparently she did.  She was only up maybe an hour and a half or two before she was ready for her nap, but she slept until about 3:00.  All that said, she was good all day.

I really don’t want Milly to become dependent on TV or movies to satisfy her, but when I’m working and Amanda’s at work I don’t really have a whole lot of choice.  She watched Toy Story 3 today (I watched some of it with her after she insisted that I sit with her), then later on we tried Ponyo.

Toy Story 3 she’s seen, either in whole or in part, several times now.  Her favorite things seem to be Big Baby (which is creepy) and the pigeon that pecks at Mr. Potato Head when he’s a tortilla.  She says “bird” before the bird even appears on screen.

She does not, however, like the monkey that monitors Sunnydale.  She’ll turn away and sometimes hug me when the monkey is on.  Oddly though, she does laugh when it’s banging Woody’s head with its cymbals.

Ponyo she was partially interested in, and she partially didn’t seem to care for it.  Maybe we’ll try that one again some day.  We all started watching it yesterday, but Amanda didn’t much care for it initially.

We tried going for a walk this evening with Milly, Bruce and Harvey.  It was about as disastrous as you might think it would be.  Milly wanted to walk Bruce, but she didn’t want Amanda to help her hold the leash very much.  Harvey is always excited and I was walking him, so he was being a bit of a pain initially, though he did seem to calm down after a few tugs on the leash.  He actually stayed with me pretty well.

But then, all at about the same time, Bruce tugged away from Milly’s grasp and Harvey somehow slipped his collar off.  Harvey ran to Mary and Dave’s, which was actually right across the street from where we happened to be, to go play with their dog, Lola.  He went up to their door and they let him right on in, then Dave let him out to the backyard so he and Lola could run around.  Bruce was easy to catch.

And that’s how we saw the inside of Mary and Dave’s house for the first time!

After we left there we decided to walk on home and made plans to alternate dogs on walking trips in the future.

Milly did get pulled down by Bruce once and had a small scratch on her knee, just as her other knee was healing up from when she tripped in the parking lot at Ogden Park a week or two ago.  I doubt we’ll even see this one tomorrow though, it was very minor.

Milly saw her first live caterpillar (as opposed to stuffed ones or ones in books) on our walk.  Amanda picked it up and let it crawl on Milly, which she was more than cool with.  She also saw her first live frog (I think) today when we got back to the house.  He was hopping around by the front patio.

After Milly went to bed Amanda and I watched How I Met Your Mother and House.  I sat at the kitchen table the whole time so I could work on some personal projects at the same time.

On a side note, if anyone can get me about an extra grand a month, I’d be grateful.