Amanda and the Flying Dead Bird

Amanda and the Flying Dead Bird 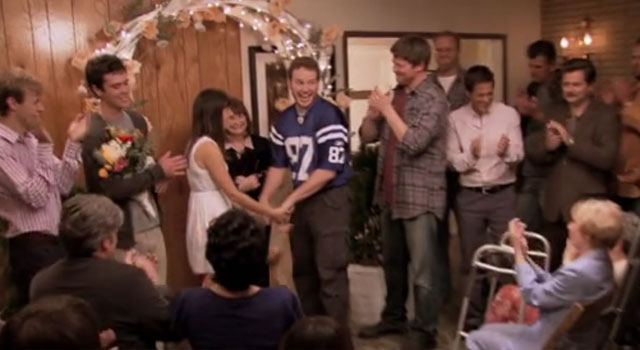 Amanda and I were watching Thursday night TV tonight and realized that we hadn’t watched last week’s Parks and Recreation, so we watched it before watching this week’s.  It was an excellent episode, with the surprise wedding of Andy and April.  There was a line about a water filter that I thought was hilarious, but nothing beat Amanda’s reaction to a bird getting released after the bride and groom kissed.

It’s something you’ve seen a hundred times, but something about the suddenness and unexpectedness of a guy tossing a bird and it falling to the ground dead made it particularly funny though.  I mean, I did think it was funny, but Amanda was laughing harder than I’ve seen her laugh in a really long time, possibly ever.  She could hardly breathe for a minute or two.

I made some headway in writing content for my site.  Still a good bit more to do, but I still expect to finish it and start promoting it within the next week or so.

Once again this morning I let Milly sleep in a bit and she still went down for her nap earlier than she has been doing in a while.  She’s also been taking an afternoon nap again lately and has had continued fussy spells.  Amanda and I even put her in the corner today when she knocked a bunch of barrettes to the floor and refused to pick them back up.

We put her down at 7:00 too.  Well, we took her upstairs to get ready for bed a few minutes before 7:00, but she was pretty well-behaved in her nursery so we let her piddle around a little bit before putting her down.  Anyway, my point is she was in bed early, which I figure won’t really affect her since she’s been wanting to sleep in.  She has woken up several times tonight though, starting at about 10:45.  If she does it any more I think it’ll be a guest room night.

Amanda and I figure she’s got molars coming in or maybe she’s hitting a growth spurt.  If it was just the fussiness we’d suppose she’s just testing her boundaries, but it’s how tired she gets that has us think it’s something else.

Finances, by the way, suck.  I didn’t think I’d be living paycheck to paycheck at this stage of my life, but I guess at least I do have a job and I do get by.

I envisioned income and expenses radiating out of me in green and red today.  I feel like I’m mostly radiating waves of red, which is staunched and maybe even turns a bit green when I’ve made a sale.  But then when I get in the car and use gas, I imagine the red getting brighter (since it now costs $50 to fill up the car).  Or when I’m at home and the AC is on, there’s a spike in red.  Or when I flush the toilet or pour some water, there’s a little more red.  It’s a sucky and kind of scary way to envision the world.