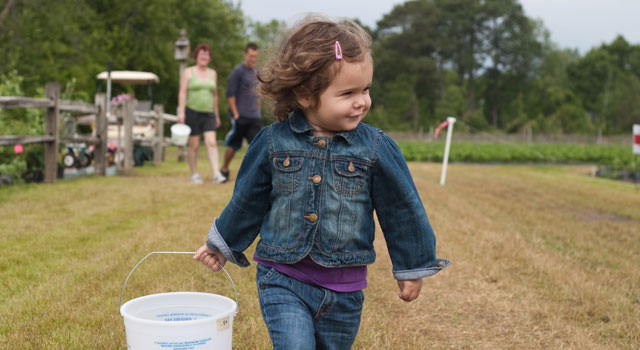 Pretty much first thing this morning Amanda, Milly and I went to Lewis Farm to pick strawberries.  Milly didn’t eat dirt like she did last time and she didn’t get nearly as dirty, but she did enjoy the strawberries more.  We had a good time out there.

When we got home, Milly went down for a nap and I mowed the lawn while Amanda took care of some clothes and went out to grab some groceries and Easter supplies.  I took a shower some time later Michael showed up and we all went to Learning Express, where they had bunnies and chicks for kids to pet.

We didn’t expect the scene we witnessed upon arrival.  The place was packed.  I mean we had to wait to get a chance to walk inside.  Amanda stood in line while I walked around with Milly to keep her occupied.  An employee was walking around with a baby rabbit and Milly wasn’t all that interested, surprisingly, so I found Amanda and told her it wasn’t going to be worth waiting in line.  We let Milly look at a few other toys and almost bought her an orange Lamborghini that she’d been carrying around the whole time, but she got distracted by some other toys right before we were about to buy it.  It’s probably a good thing anyway, because the thing was $6.99.  I would have thought it would maybe be five bucks and wouldn’t have even considered buying it, but Michael offered to pay half to get it for her.

We went home and just hung around for a bit until Amanda and Michael’s mom showed up.  Karen treated us all to some Outback, which I always love.  When we got back home I took care of a special work case then hung out with everyone.

Milly’s been saying prayer with me and Amanda for a while now, just repeating what we say.  I think she was a little too wound up from having her Nana there tonight, so she wasn’t very cooperative.  She did go down fine though.

After we got Milly to bed we played a game of Stone Age.  Michael won a close one.  If the game had gone one more round I’d have had him, but he ended it hoping for the best.  Oh well.

Milly wasn’t fuzzy much today.  She had a couple times she almost blew up at Outback and was fussy before her nap, but otherwise she was very good.  She was pretty talkative in the car this morning, actually.  I had urged a truck in front of us to go, saying, “Go, truck!”  Milly picked that up and repeated it a bunch, but it was funny because she can’t quite make out the TR sound yet, so it comes out as more of an F sound.  That had us all laughing a good bit.

PrevPreviousAmanda and the Flying Dead Bird
NextEaster Saturday 2011Next