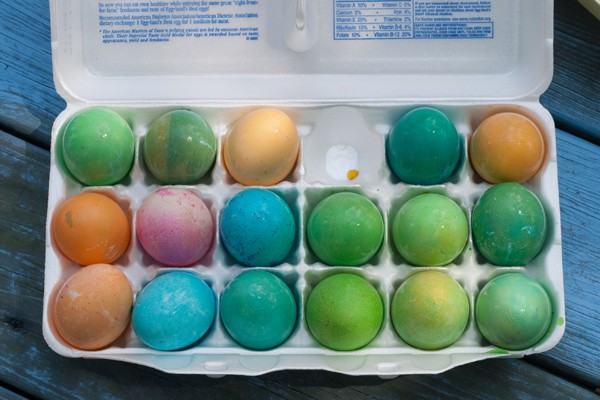 Amanda was up and starting on breakfast pretty much as soon as she got out of bed this morning, save a couple minutes where she got Milly up and she ended up playing in the bed a little with us.  She was getting ready for a pretty big bunch to come over for brunch.  It was (in order of appearance): Amanda, Milly, Karen and I, who were already here; Amy and Eli; all four Frazelles; Michael.

While Amanda was cooking waffles, eggs and sausage, I was cleaning up a bit.  Karen ran to the store and helped clean up and watch Milly.

Spending Easter, or at least part of it, with Amy and Eli Warkentien seems to have become something of a tradition, since they went to Beulaville with us for Easter last year.  Nick, being a church employee, tends to have a busy weekend and their families live in Michigan.  They’re some of our best friends, so it’s nice to be able to spend some time with them like that.

Aside from the food, we also dyed eggs.  Well, Milly and Eli did, anyway.  Some of them actually turned out very nice, though more than a few were cracked when they were dropped into the dye.

Both kids were in need of a bath after that, so Milly had her first bath with a boy (though it wasn’t Eli’s first bath with a girl!).  They played well together, though at one point Milly was washing Eli, pouring water on him and rubbing his tummy.  I looked away for a second and when I looked back she was, well, let’s just say I had to tell Milly not to touch that.  All innocent, of course, and absolutely nothing was meant by it but as her father it embarrassed me slightly.

While they were in the bath, Amanda’s dad, Phil showed up.  He’d had a meeting this morning.  Eli seemed very interested in saying hi to Paw Paw, and Amy explained that he’d seen so many Papas and similarly-called grandpas lately that he probably thought Phil was one of his own.

Everyone except for Amanda’s family cleared out and Milly took a nap.  Amanda and Karen went out to get some small things for Milly’s Easter basket, but they ended up being out for a lot longer.  Of course, they ended up going shopping.  At the house in the meantime, Michael, Phil and I lounged around.  Milly woke up earlier than expected, so she just hung out with us for a while.

Phil took off after a bit and the rest of us got ready to head to Port City Community Church.  Amanda’s friend and Milly’s occasional babysitter Cyra had decided to come to church with us.  We took two separate cars.  Amanda and Cyra rode together so Amanda could stop by Costco to pick up some cat food and Michael, Karen, Milly and I headed off to church to make sure we could get in line for Grow Zone to drop Milly off.

Milly was great in line at Grow Zone though.  There was a little girl who was about two weeks younger (but about half a head taller) than her right behind us named Lena.  They played together some and hugged a few times.  It was very sweet.

The service started out with Enterlude by The Killers:

I thought it was clever.  They knocked the music out of the park, of course, and Mike message was as good as you’d expect it to be on an Easter Sunday.

After the service I picked up Milly.  Michael went with me and Milly to leave directly from church to Richlands while Amanda and Karen went by the house to pick up a few things (Bruce and Harvey, in particular) then they left as well.  Milly was a little fussy in the early part of the trip, but Michael gave her his keys, which kept her happy the whole rest of the way.

Milly had a good time walking around outside when we first got to Amanda’s parents’ house.  We found a ladybug by the wheat field and Milly let it crawl up her arm, then we looked at the fish in the little pond.  Paddy, Karen and Phil’s Jack Russell terrier, was trying to eat the fish food Phil had poured in the pond and fell in the water, which had Milly laughing pretty hard.

It took Amanda and Karen a while to get here.  They stopped to pick up some Smithfield’s BBQ and I guess that took a while.  Michael and I were really hungry by the time they arrive and we all tore through some chicken.

After we put Milly down to sleep in the Dungeon, a wonderful little room that is a glorified closet and is almost completely black with the door shut and the light off- I used to love sleeping in there- we played Dominion.  This was Karen’s first time playing and Michael’s second, though he didn’t remember much of it.  Amanda won the first game and I won the second.  We had let Michael pick some of the cards for that second game, and it featured the Witch and the Thief.  So not only were people not going out of their way not to pick up money for fear of it being stolen, but I loaded up on some Witch cards which resulted in the lowest scoring game ever.  I’d say the winner of an average game of Dominion has between 50 and 70 points.  The total of our combined scores was 11.  I had 12, Amanda and Karen had 0 and Michael had -1.  Yeah, I had a few Witches, some Throne Rooms (which let me play the Witch twice at once) and a lot of Moats to protect against other people having Witches.

After those two games, Amanda, Michael and I played a game of Small World, which I won.  Amanda went to bed so Michael and I tried it out as a two player game, which was just as fun, and I won that one too.  The nice thing about me having won the two games of Small World is that in the previous two games we played I came in last place.