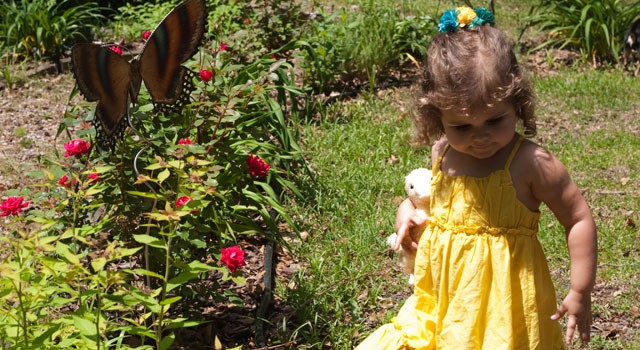 Milly woke up once last night then again a little before 9:00 this morning.  She just needed a diaper change the first time, the second time Amanda and I were deciding who was going to get her versus who was going to take a shower first when Milly decided it for us by calling, “Daddy!”

We took her downstairs and let her see the basket the Easter Bunny had left for her.  It had a bunch of eggs with either new “hair bows” M&Ms, a piece of chocolate or a box of raisins in them, a coloring book and crayons, a pinwheel (which was slightly bent, so it didn’t work very well at all), and the movie Tangled in it.  There was also a new yellow dress that Milly wore to church this morning.

Yes, we went to church again today.  Karen wanted to show everyone her whole family (Milly in particular, of course).

Milly was ready for a nap when we got home, so she went down and the rest of us ate some chili.  Phil had the idea of putting it in a soft taco shell, which was really good.

After lunch, Amanda, Michael and I played another game of Small World.  Yesterday’s magic had worn off I guess, because I lost that again.

We were considering playing another game of it when we heard Milly make some noise.  We got her up and ready, packed everything up and headed to Beulaville to visit with Amanda’s grandparents.

The Frazelles were already at Peggy and Earl’s when we arrived, which may have been a first.  Milly found an Easter tree to play with.  I guess that’s what you’d call it, as it was a small tree decorated with Easter stuff.  She really liked that thing and was showing it to everyone.  We ate a nice big supper, dinner, whatever you’d want to call it.

Even though we’d dyed eggs yesterday, we let Milly dye some more today for GG’s sake (GG stands for great-grandma- I’m not sure if I’ve ever referred to Peggy as GG on here before).  Milly didn’t get nearly as messy this time.

We played at the park across the street for a bit.  Milly went down a big metal slide with Anna a few times.  It was surprising because she’s usually pretty unsure of even small slides.  She enjoyed it though.  While we were over there doing that, Amanda and Hannah hid Easter eggs in the yard.  Most of them were just out in the open and very easy to find to make it easy for an almost-two-year-old.

There was a tribute or memorial across the street in a field for a 17 year old kid who had OD’ed on drugs.  There was a lot of music and praying and a decent little crowd.

We left a little while after the Easter egg hunt.  We had a pretty full car with me, Amanda, Milly, Michael, Bruce and Harvey.  Milly wanted Bruce in her lap, so he ended up with his head in her car seat and his butt on Michael, mostly covered by one of Milly’s blankets.  Milly was good the whole way back.  We thought she was going to fall asleep, but she never did.

We got home right at bedtime and Milly went down without any trouble.  Amanda, Michael and I played a game of Dominion that I won.  Despite not having won a game yet, Michael does seem to enjoy playing it.