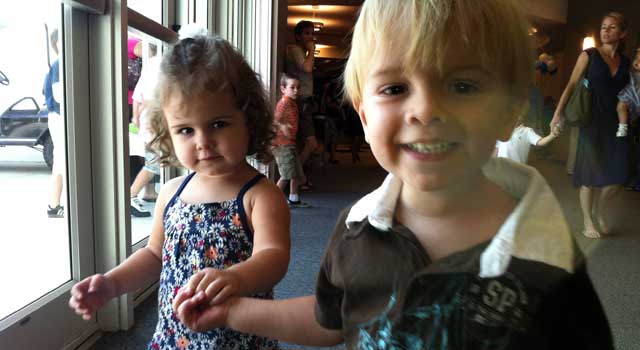 I’ve been married to Amanda seven years today.  It wasn’t a big deal to us though, so I’ll come back to that.

What I want most to talk about is Milly and Eli this morning.  It started off when I took Milly downstairs and to the guest room to get Eli up and ready for church.  She saw the pack & play was set up, so she asked to get “up,” or in it.  Eli was mostly covered in his blanket, so when she saw a pile of cloth moving she quickly asked to get “down,” or out.  After she realized it was Eli though, she started walking down the hall and saying, “‘Come on, Eli.”  (In Milly-talk though, it was “Mon, E-I.”)

They ate oatmeal together then we looked for Eli’s shoes, which we discovered Nick had forgotten to bring, so we had to run by their  house to pick them up.  Nick had said we could just take him in socks, but we weren’t going to do that and his feet are bigger than Milly’s so we couldn’t put her shoes on him.

Nick met us in the Grow Zone line at church and checked Eli into his room to spend a little time with him, but I picked him up so Eli wouldn’t see his ad and possibly get clingy.  Eli seemed to like walking a good bit faster than Milly, so we asked him and Milly to hold hands, and holy cow was it the cutest thing ever.  They walked a good length of the church, two little kids holding hands.  Just about everyone who saw them smiled and/or said something about how absolutely adorable it was.

After church (Anna and Barry sat with us and Brian Few did the message today) we went to Atlanta Bread.  Milly and Eli talked, as they did on the way to church, pretty much  the whole time.  Eli mostly talked about Harvey and Milly talked about whatever.  They both had toy cars (Milly had Taxi and Eli had Ernie) and at one point Milly said “share” and they swapped toys, then Milly thanked Eli.  There were a few time where Eli ended up with both cars, but he was quick to give one back to Milly as soon as we asked him to.  They got along so well, and it’s so cool to see Milly interacting so much now.

At Atlanta Bread they both had muffin tops.  We sat them in high chairs next to each other just to make it easier to keep track of them.  On the way out we had them hold hands again as they crossed the street.  Eli, leading Milly, walked up to a window at Pier One as if looking at something he wanted to buy.  It was very cute.

Neither kid went inside once we got home.  I took them for a ride in the wagon then they played in the front yard for a bit.  Amanda watched them after she got back from getting a few things at the grocery store so I could go change my clothes.  When I came back down, Amanda’s aunt and uncle, Ona and Peter, had arrived.  They’d been to a wedding yesterday and were there to see us and have lunch.  Ona went to help Amanda while Peter stayed outside to help me watch the kids.

After a little while Milly and Eli wanted to get in the wagon again, and when we got to the cul-de-sac Milly wanted to get out to pick flowers in a little grassy area the road loops around at the end of the cul-de-sac.  Milly spent some time picking dandelions and peeling bark off some pine trees while Eli threw pine cones.

After we’d been there for a little while I decided it might be good to call Amanda and let her know where we were in case Amy showed up, though it turned out that Amy had been at the house for a little while.  She walked down then we loaded the kids up and went back to the house where she and Eli left us.

Amy hadn’t been gone but a few minutes when the rest of Amanda’s immediate family, Phil, Karen and Michael, all showed up.  Phil grilled the burgers Amanda had been preparing then we all ate lunch, hung out a bit, talked, that sort of thing.  I put Milly down for a nap around 2:00 and dozed off with her for a few minutes on the floor after changing her diaper and cuddling with her.  Peter and Ona took off a few minutes after I got back downstairs and Karen and Phil left a while after that.  Michael stuck around to kill me and Amanda at Small World.  I don’t know what the deal was, but I did several boneheaded things during the game that messed me up petty bad and helped make sure Michael would dominate us.

Milly, who had been really good considering she didn’t have any semblance of a morning nap, was pretty needy after she got up.  After Michael left we saw Charles and Kimber playing with a remote control Jeep and took Milly outside to socialize.  Amanda and I talked with Charles and Deanna for a bit while Kenzie and Kimber played with Milly.  I know I always say this when I talk about them, but those girls are so sweet with Milly.

Milly was in bed a little while after we came in from that.  Her rash is better overall, but there’s still this one awful red spot.  At least she doesn’t writhe in pain when she’s wiped now, and the bad rash spot only makes her wince.

Amanda and I caught up on Fringe after she went to bed, and that, thanks to an upset stomach, is how we celebrated seven years of marriage.  In all seriousness, it was a nice anniversary.  We had a lot of fun with Milly (particularly watching her and Eli) and we got to spend some time with family.  Anniversaries aren’t a huge deal to us, so aside from Amanda not having an upset stomach, there wasn’t much more we could have asked for.