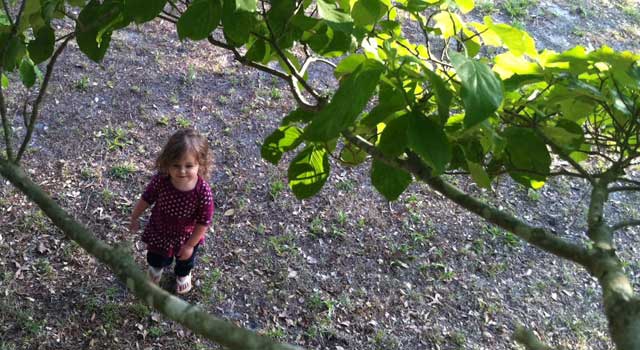 Amanda and I played a new game with Milly this evening.  Milly and I had gone outside and were waiting for Amanda to join us when I decided we should hide then get Mommy when she came outside.  I picked Milly up and went behind a bush then announced my plans loud enough for Amanda to hear when she came out.  As soon she got about halfway through the yard, I told Milly to run out and get Mommy.  For the next little bit either Milly was running away and hiding from me or Amanda with the other parent’s help or else she was running after one of us.  It was a fun little game and it was really cute to see Milly peek out from behind a tree when she was trying to hide.

We went for a walk after that, and on the way back to the house Milly saw Dave Narron in his boat.  Milly seems fascinated by boats, so we took her to see Dave and his boat.  Of course, Milly decided to get shy as soon as we got within five feet of Dave, despite the fact that she was shouting hi and bye to him a few minutes before when we were walking past his house on the way down the street.  Anyway, it was the first time Milly got to see a boat up close.

I found out yesterday at small group that Kevin and Lauren Millard have another kid on the way.  I guess this time there won’t be exactly two weeks between the birth of their kid and ours.  I called Kevin today to congratulate them.  Apparently it’s been on Facebook for a bit and I just missed it.

It’s funny how we found out.  Jamie Andrews saw a picture we have of the Millards on our wall (from Christmas- I suppose we should take all our Christmas cards down some time) and asked how we knew them.  She apparently went to school with Kevin.  Anyway, we were just talking and it came up in conversation that way.

I did a bit of work on one of my website projects last night, trying to perfect a web design quote form.  There’s some collaborative work going tonight for another one.

I’ve got a few things to do for my actual work tomorrow too.  There are three sites I’m trying to get finished up and one proposal for some work that I need to get sent out as well.

Milly’s sleep pattern was, as we expected it would be, disrupted today from going to bed at 6:30 last night.  She was up and very loudly fussing before 7:30.  I waited for Amanda to leave for work then let her lie in bed with me for a bit.  She actually did just sit there and do nothing but cuddle with me for a little bit.

She asked for a nap (I love that she’s doing that!) at about 9:15, but she was up again an hour later, then back down around 11:30.  Everything sort of normalized after that.  Whatever’s been wrong with Milly’s stomach seems to have begun to subside, though she’s still got a bright red spot of a rash.  Amanda’s stomach isn’t 100% better yet either.

Amanda and I watched The Event after we put Milly down.  I think it’s a show that has definitely gotten better as it’s gone along.  Amanda watched American Idol after that while I came back to the office to try to get ahead on some work, though I had a hard time concentrating and didn’t do much.