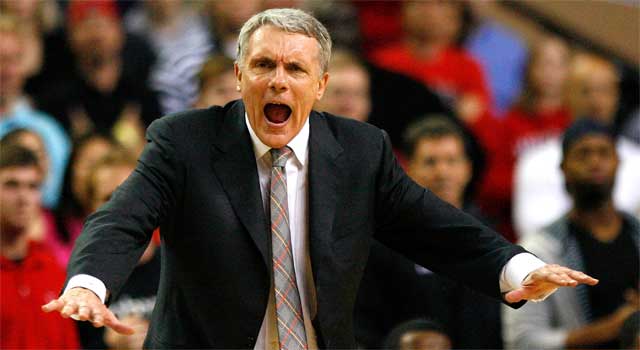 That could be a reference to Gone Baby Gone or the “Sweat, Gary sweat” chant.  Either way, Gary Williams will no longer be sweating on the sidelines as he coaches men’s basketball at the University of Maryland because Gary Williams announced today that he’s retiring.  It really felt like it came out of the blue.  Honestly, I never had too much of a problem with Gary Williams,  even considering Maryland’s “rivalry” with Duke.  I like that he was the type of coach that spoke his mind.  The one thing I wish he’d done different was to do something to try to reign in the hooliganism the Terp fans are known for.  There are some big names being thrown as as considerations for replacing him, and for the sake of the ACC I hope they get someone who will be decent.

I’m starting to get spoiled by Milly telling us that she wants naps.  She did it again this morning, telling me that she wanted a blanket and a paci and that she wanted to go upstairs.  And it’s not that she just wants a blanket and a paci and to go upstairs, because she lets me change her diaper and put her right in bed with no fuss whatsoever then goes to sleep.  Later in the day she wanted to have her paci and blanket in the pack & play that was set up in the guest room with the light off and the door shut.  I don’t think she ended up sleeping then, but she at least acted like she wanted to.  Growth spurt maybe?  Amanda’s grandpa, Earl, did say today that he thought she was slimming down some.

I didn’t see Earl.  Amanda and Milly had lunch at the mall with her grandparents, Anna, Hannah and Christian.  I think Michael may have been there too.  Amanda said Milly was sitting with Hannah and gave Christian (Hannah’s boyfriend, if you’re not keeping up) her sly sideways look.  That little girl really loves her some Christian.

As I said though, I didn’t see Earl and I didn’t see the rest of them.  I was meeting with my intern, Michelle, who is just about done with finals and ready to start working.  I’m really excited to have someone working with me in that capacity.

While I was at the Port City Java, a black guy next to me was laughing his butt off.  He was laughing so much that I couldn’t help but laugh too.  He came over to me and told me he just had to show me this video.

After work we headed out to buy a present for Amanda’s dad for his birthday from her mom.  She wanted me to check it out before she got it, and honestly I really enjoyed checking it out, so I think Phil will like it.  The girl who sold us the thing really liked playing with Milly and said goodbye to her by name when we left.  Afterwards we (Amanda, Milly and I) ate then came on home.

On the way inside we saw our neighbors, Jeremy and Heather, outside with their two smaller dogs, Rambo and Macy.  Milly wanted to see them (the dogs), and they (Jeremy and Heather) had never really seen Milly before, so everyone enjoyed meeting someone.

Speaking of dogs, Dave (of Mary and Dave; is it odd that I know so few of my neighbors’ last names?) called to ask about letting Harvey come over to play with their dog, Lola.  He called the house though, and our phones don’t work, but he left a message so I walked Harvey over there.

Amanda and Milly were at the park at that time.  Amanda said Milly played with one little girl and it was really cute.  They hugged while I was talking on the phone with Amanda.

It was about 8:00 when we came home from shopping and dinner so we went right on up and put Milly to bed then watched our Thursday night shows.

Amanda’s stomach seems to be better.  Milly still has that rash spot, but it doesn’t seem to be bothering her much.