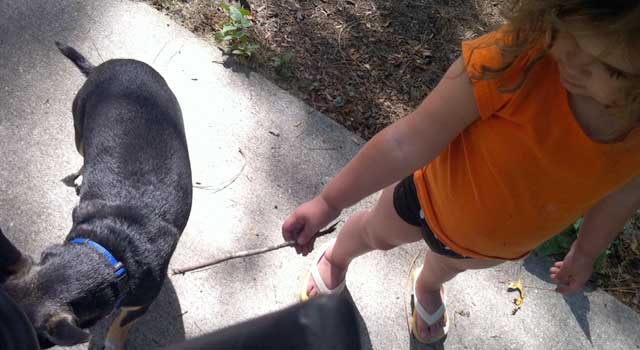 Milly was a lot of fun this morning. She slept until 9 (we let her sleep in on Fridays) and we ate waffles outside since it was nice out. Milly had a stick Harvey likes to play with and kept offering him a “bite” and tried to get him to fetch it. She also found a “baby stick” for Bruce, but he wasn’t at all interested.

There was this really crappy toy from a cereal box that Amanda and I were messing with last night. You’re supposed to wind it up and hit a button them this propeller part flies up, but it hardly flies up and it doesn’t go very far. Milly brought it to me and I called it a crappy toy to she called it a crappy toy. It was hilarious to me and I knew what I was doing (that shed call it that). I probably shouldn’t do stuff like that too much.

I took off work a little early to go get another present for Amanda, one for Mother’s Day. Milly went with me and we went downtown, stopping to see Michael at Port City Java and Jenn at Java Dog. Milly took Jenn by the hand and walked her out of the store to see a dog across the way. It was all very sweet.

We were going to stop by the grocery store on the way home, but someone was apparently ready to get out of the car and stay out of the car, so I dropped Milly off and went myself.

Amanda decided she wanted to bake pizza for dinner, but I couldn’t find any unfrozen dough. I did find some Pillsbury pizza dough, but the crust didn’t vet all that crispy. It was decent.

Karen and Phil came tonight because we’re celebrating Amanda’s and Phil’s birthdays tomorrow with breakfast at Sweet & Savory, where I’ll be ordering French toast. Anyway, they got here just a bit before 8:00 as Milly was finishing watching Tangled. She was excited to see them and surprisingly excited to see Paddy. Milly tends to shy away from the hyper Jack Russell, but she encouraged Paddy to come upstairs as we prepared to put her to bed.

Amanda and Phil went to get a door for the wall upstairs. It’s long overdue. I’d have gone, but I was prepping the part of Amanda’s gift that had come in. If she just saw what I’ve already got for her it might take her a minute to figure out what the main gift is, so I did something about that.

Amanda’s main gift, by the way, won’t even ship until sometime between early next week and the week after that. I thought it would be easier to get by now, but nope. I looked all over the place to find one and even called places that would have it today just to see if I could get one in time (and either cancel the existing order or return one of them), but no luck. There were places that did have it, but they were much more expensive.

Anyway, while Amanda and her dad were gone, I was showing Karen Netflix. I tried to show her the beginning of Up before Amanda and Phil got back, but we didn’t get all the way through. We ended up starting that over and we all watched it.