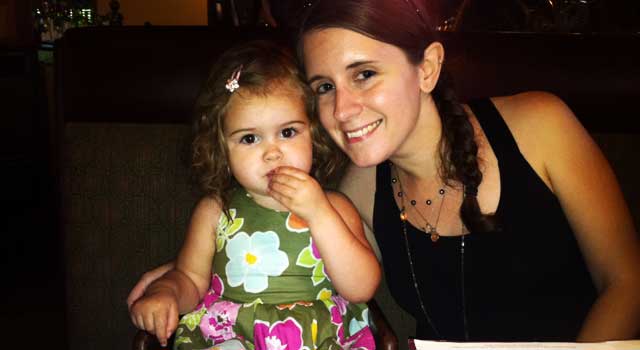 My wife turned 31 today.  It was a mostly uneventful affair, since she’d received her gifts already and worked a full day.  She did go out for lunch.  Yesterday she’d said something about me making spaghetti for her birthday dinner, but that changed to pizza at Elizabeth’s at some point during the day.  By the time she got home it was Macaroni Grill, so that’s where we went.

It was nothing flashy, but we had a nice time.  Milly got a little pizza.  She was definitely in the mood for pizza, because she was saying “pizza” before she even knew we were going anywhere.  I hadn’t even mentioned that her mother wanted pizza for dinner earlier.  I suggested we get some ice cream at Boombalatti’s for dessert.

While I was paying the dinner bill (with a gift card Amanda’s mom gave us for our anniversary), Amanda and Milly were outside looking at a retention pond.  It was shaped more like a very long and deep ditch, but there were turtles and fish in it and a rail to keep you from falling in.  For what it is, it’s actually kind of nice.  Anyway, Milly kept saying “turtle” but Amanda said she’d also said “Nemo” (none of the fish she saw were clown fish, but I had drawn a picture of Nemo on the tablecloth for her) and “shark.”  Really no idea where she got that one from.

As we walked away Milly said, “Bye, turtle.  Bye, Nemo.  Bye, shark.  Birdie!”  There was a large bird on a light pole that somehow really excited her.

Once we got home after eating our ice cream, where Milly had, I think, her first ever sip from a water fountain and I got more ice cream on my shirt than Milly got anywhere (the area around her mouth notwithstanding), Milly saw Kenzie and Kimber outside so she went to join them.  She refers to them now as “girls.”

We let Milly play outside for a bit then put her down and finished the night with a little TV.  Amanda expressed a wish that every day could be her birthday and said that since her anniversary, birthday and Mother’s Day were all in the same month, she should just be able to celebrate it all every day of the month.

That was pretty much it for the day.  Oh, I assigned Michelle, my intern, her first few assignments.  She did a fine job with each of them.

And Milly had a weird sleep schedule today.  She got up at 8:20, wanted to go back down an hour later but then got up again at 10:30 and then went down from 3-5.  She was well-behaved though.