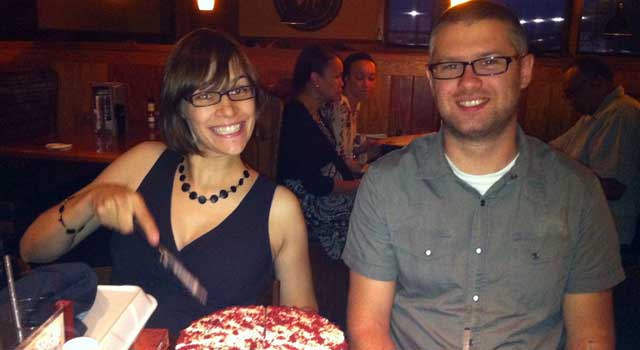 My good friend Nick Warkentien celebrated his 30th birthday (which was yesterday) today with a bunch of friends at Outback Steakhouse.  Nick said he had maybe been to an Outback once or twice before and had initially planned on going out to Texas Roadhouse, but when Amy called to make reservations they were told they didn’t take reservations, they couldn’t seat us until everyone was there and they probably couldn’t seat us all together.  Wha-?  Outback told then they don’t take reservations either until Amy told them it would be a party of about 14.  Then they were like, “Oh, well okay then.”

I love Outback.  Since probably 1994 I’ve always ordered the Alice Springs Chicken and/or cheese fries.  Amanda pointed out that each trip I take to Outback eating like that takes a year off my life, and I have been banned from ordering cheese fries.  At least I don’t try to eat the Chocolate Thunder from Down Under anymore.  Man, if only I could eat like I could when I was 19.

Anyway, we had a good time hanging out with everyone there.

Blake and Stephanie Konny babysat Milly for us.  When Amanda and I were first trying to leave, Milly got upset and decided she’d rather go to bed an hour and a half early than hang out with the Konnys (Konnies?), who are a really great couple.  In reality, she hadn’t napped much today and was a little stuffy, probably fighting off a cold (as is Amanda).  Blake said Milly got up shortly after we left and hung out with them just fine.

Amanda and I got home a little after 8:30 and put Milly to bed, though she was pretty wired.  After that we played Carcassonne with Blake and Stephanie.  Amanda, of course, won.  It’s the damn trade goods that did it for her this time.  Without them, I won.  Doesn’t matter though- I lost.  Well, Blake lost I think.  I came in second.

So, you ask, how was Milly’s first night in a bed?  Well, as far as I could tell, she was in it and never got up.  When I went into her room this morning she was standing in her bed, facing the door.  Mysteriously though, the large fake flowers she’s so fond us had appeared in her bed.  Hmm.

Milly did some cute things today (of course!).  She wanted to wear her yellow dress with the little straps again, and she wanted to wear her frilly pink skirt underneath it with a buttoned sweater on top.  It was amazingly adorable, and, as Amanda pointed out, it kind of worked as an outfit.

She also bumped heads with Amanda and said, “Sorry, Mommy.”  How cool is that?  Amanda said it was the sweetest thing.

Amanda spent some time sorting out the clothes that Milly has outgrown.  It was sad to look through them and realize she wouldn’t get to wear so many articles of clothing that are so cute on her.

My workday was pretty stressful, particularly this morning.  Normally Fridays are at least somewhat laid back, but not this one.  I guess it is Friday the 13th , after all.

That was pretty much our day.  After Blake and Stephanie left Amanda and I watched Parks and Recreation then an episode of Friday Night Lights.  During the latter, Sam and Steph Moorehead came by to borrow some blankets and such because they had become inundated with family visitors.

When Amanda went to bed I played Gears of  War 3 with Michael and Chris for a bit.  I actually did alright tonight, though that was when the opposing team was mostly populated with bots.