Ice Cream with the Frazelles

Ice Cream with the Frazelles 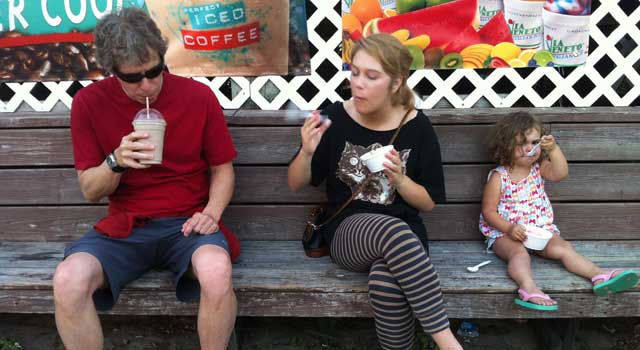 While I was running through rehearsal for running a video camera at church today, my cousin was busy becoming a first-time dad.  Congrats to David and Ksusha Cherryholmes on the arrival of Anya Cherryholmes, who came in a eight pounds and 22 inches!  I think it’s so cool that Milly’s now got a younger cousin, and two girl cousins who are so close to each other in age now.

So, speaking of running cameras, the first service went pretty smoothly, though I know there was one spot where I messed up in the first song.  I don’t know what the deal was, but in the second service I think each of us mobile camera operators had a mental breakdown during the first song.  Maybe the rhythm of the cuts was more different than we were used to, I don’t know.  There was something funky going on with us.  The rest of it went real well though.

I ran back home between services to pick up Amanda and Milly and picked up some medicine for Mike Paschal, who wasn’t feeling good and may have had an ulcer developing in his stomach.  Cyra had decided to come to church with us today, and Milly was thrilled to have Cyra (or See-ba) in the backseat with her and chatted at her incessantly on the way to church.  She also wanted Cyra to carry her when we got to the church.

After Milly’s nap today, we went to the Frazelles’ for dinner after stopping at Old Navy for Amanda to use up the last of a gift card on a couple of bathing suits for Milly that were on sale.  Barry and I went to look at the waves, which were surprisingly good considering how windy it was out there.  When we left the house, Milly was on the porch with Kirsten (Kooky, as Milly calls her) and apparently wanted to follow me out to the beach.  Barry and I saw them on our way back to get changed and grab the boards, but Milly didn’t care to follow us back to the house.  Amanda, who had been keeping company with Anna, who was making some homemade pizza, joined them after making sure Anna didn’t need any help.

Surfing was decent.  The waves were of a decent size, when they were there.  I caught a couple, rode one to the end then turned back around and rode felt like I had really good control on the last one I rode in.

We all ate outside on the porch, though Milly wanted to get down and explore a little.  Different people kept getting up to make sure she wasn’t going to walk down the steps or anything.

After dinner we walked to the middle of the island to get some ice cream.  We took the larger stroller, but Milly wanted to get out and walk or be carried about halfway there and didn’t sit in the stroller at all on the way back.  It impeded out speed a little, to say the least.  She was a lot of fun though, passing herself off from person to person and marveling at the moon on one side of her and the Intracoastal Waterway on the other side.  She was definitely a little hopped up on the way back, but she got it out of her system by the time we got  in the car.

It was about a quarter ’til eight when we were finished with the ice cream, so Milly didn’t get to bed until about 9:00.  I don’t much mind though.  That means if I get her up at her regular time tomorrow she’ll probably take an early nap and sleep a good long while.  The Frazelle ladies are planning on taking her to Lewis Farm after her nap, so she should be good and rested for it.