From Wilmington to Lewisville

From Wilmington to Lewisville 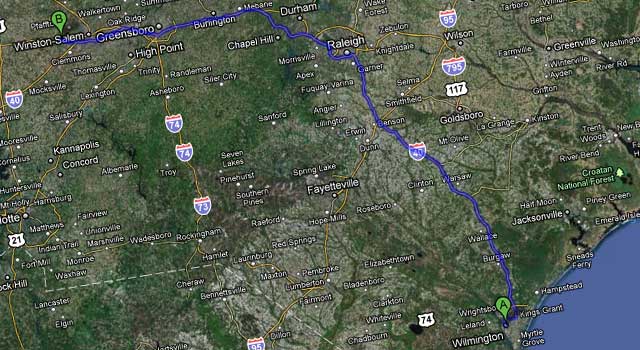 I worked half a day today so we could take off from Wilmington early to make it to the Lambeths’ house in Lewisville at a decent time while avoiding traffic.  In order to try to get Milly to take a nap during the ride, I let her sleep until 10:00.  She ended up sleeping all of 40 minutes after we’d already passed Durham.

We made good time, finishing the trip in about three and a half hours, not including the 30 minutes we lost when we realized we’d forgotten a couple of things at the house.  We had just gone up the road though- put some air in the tires and stopped to get a drink at CVS.

We got to meet baby Daniel Lambeth for the first time.  He smiles very easily.  Milly was much more interested in all of Graelyn’s toys than she was in looking at a baby.

We had pizza for dinner.  Ben wasn’t around long as he had to go to a band rehearsal.  He’s playing bass at Salem Chapel this weekend.  Milly and Graelyn didn’t play a whole lot, but Milly did tell Gay-win that she loved her right out of the blue.  They did both play outside a bit and enjoyed bath time together.

We experimented with putting them in the same room to sleep with Graelyn in her crib and Milly in a pack & play.  Graelyn cried at first, but Jessica said she always does that when you put her down to sleep.  Through the door we heard Milly say, “Stop, Graelyn.”  We all thought it was hilarious.

What was less hilarious was that after a few minutes Milly started crying for a bit.  When we finally checked on her we saw that she’d dropped her paci.  She kept crying after that though, so we ended up moving her and the pack & play to the bathroom, where she cried for 40 or more minutes straight.

We played Carcassonne and I actually won.  It was pretty close though.

On a side note, I finally finished Dracula, which I started reading on my iPhone quite a while back.  Now I can start on A Game of Thrones, the first book in the series A Song of Ice and Fire.  I’ve really loved the HBO show and Adam and David have suggested it to me often.  I downloaded the complete series (what’s been published so far anyway) last night.  Legally, in case you’re wondering.  I’m pretty sure it was legal anyway, since I found it on my first search and it loaded right onto my iPhone.