Pillars of the Earth

Pillars of the Earth 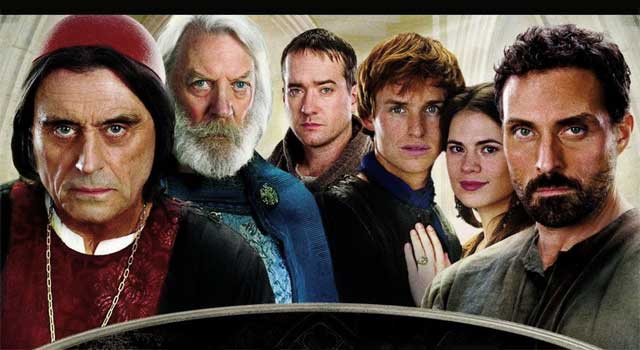 I saw that Pillars of the Earth was on Netflix a few weeks ago.  I queued it up, but I was tired and fell asleep before the first scene.  I guess I was really tired.

I decided to try it again and I really liked it.  I know that’s shocking, given that it’s set in twelfth century England and stars Ian McShane, right?  (In case you don’t know, I love watching Ian McShane act.)  It has its ups and downs, but overall I really enjoyed the journey.  Really, my biggest quibble is that Donald Sutherland’s character is on the DVD cover since he wasn’t in it all that much.

Work was pretty busy, particularly this afternoon.  It was a good busy though.

I did stop just a little bit early today to mow the lawn.  It was badly needed and I’m not sure at what point I’d have been able to get to it in the next while.  Mowing my front yard was a little depressing though.  I think it’s more dirt than it is grass at this point.  It really would be nice to get the well hooked back up to the sprinkler system.  I’m still not entirely sure why it was disconnected.

Amanda spent a good bit of the day taking care of laundry and getting things ready for our upcoming trip.  She had Milly upstairs with her for most of that time, and Milly ended up in the corner twice.  She (Milly) was crying so hard the first time that I went upstairs to see if something was wrong.  Milly’s just been in a bit of a defiant mood lately.  We went over to the Frazelles’ for dinner tonight and she was even testing us there.

That’s not to say Milly was all bad today by any means.  The very first thing she said when she woke up today was, “Wanna see Kooky (her name for Kirsten).”  She recognized Kooky’s car when we got to the Frazelles’ too.  She was very affectionate while there and entertained us all when she ate a frozen yogurt pop.  She was all into it, but she’d take little breaks to randomly say hi to people sitting at the table, or to spout off a quick stream of gibberish.  She also said, “Bye, Frazelles,” when we left, though I can’t recall how she pronounced “Frazelles”.  It was close enough that we knew what she meant.

After Milly went to bed Amanda watched American Idol, which was won by North Carolina native Scotty McCreery.  They showed a huge crowd in Raleigh’s RBC Center cheering for him, and I said it was because they hadn’t had much else to cheer about lately.  (In case you don’t get it, the RBC Center is where NC State plays their basketball games, and they were pretty bad last season.)  I checked it out here and there and tuned it for the final minute or two when they announced the winner.

One thing Amanda and I thought was funny was that Scotty went, during the time he was supposed to be singing his new song, to hug his friends and family.  Jack Blank (who sand Fat Bottomed Girls with Casey Abrams earlier in the night) was next to some of the people Scotty hugged and put his arms out to hug him, but Scotty didn’t see him, so Amanda and I joked that he was dissing Jack Black.

I spent some time doing some work so I wouldn’t have to do it tomorrow.

I also had a number of texts sent back and forth with Amanda’s brother, Michael, about the HBO series Game of Thrones.  It’s a pretty complex show and we were discussing some of the things going on in it.  I really love the show- it’s probably the one I look forward to more than any others right now.  HBO shows have a habit of doing that to me.

Anyway, my own brother, Adam, and my cousin, David, had always suggested that I read A Song of Ice and Fire, the actual name of the series by George R. R. Martin.  I never got around to it, but since I’m always wanting more when an episode ends I’ve been considering buying the books.  My problem with that is that I tend to read more lately when I’ve got whatever I’m reading available on my iPhone.  Well, fortunately for me, I’ve discovered that I can download, legally and for free, copies of the books to my iPhone.  I’ll probably start reading them tonight.

I really think book sellers should make a push to sell digital copies of books with paper editions.  As I said, I’ve found that I’ll read a digital edition of a book more than I will a paper one now, but I don’t like the idea of paying ten bucks for a digital book- I want to have a hard copy if I’m buying it.  I surely can’t be alone in that feeling.

PrevPreviousDon’t Ever!
NextFrom Wilmington to LewisvilleNext