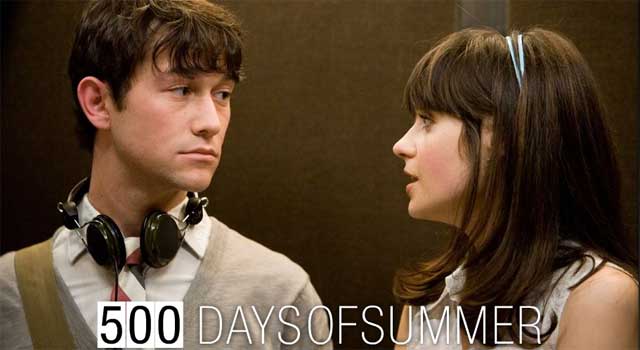 Amanda and I watched 500 Days of Summer tonight.  It had a good soundtrack and Amanda liked Zooey Deschanel’s clothes.  I asked Amanda, who watched the movie a couple weeks ago with Stephanie Johnson and Cyra what she thought about the movie.  She said every girl she’s talked to about it think that Summer, Zooey Deschanel’s character in the movie, was in the wrong.  (That wasn’t the exact phrasing she used, for the record.)

The movie made me a little sad.  I never had a relationship that mirrored the one in the movie, but I can certainly identify with the feelings behind it.  You’re totally happy and think things are going great, then with little or no warning you’re suddenly apart without any real explanation and you’ve been replaced.  There’s apparently nothing wrong with you, but someone apparently better has come along and you’re left to try to put the pieces of your heart and your life back together.  Some of the toughest times in my life revolved around the plot of that movie.

All that said, as cute as Zooey Deschanel is, if he ended up with Minka Kelly then more power to him.

Karen treated us to Cracker Barrel this morning.  Milly wasn’t too interested in the eggs or the bit of pancake her mom tried to give her, but she was all about some of her daddy’s bacon.

After we got back and Milly went down for her nap, Amanda and Karen went out to get some things for Milly’s birthday party next week.  Phil arrived not long after they got back and he and I set to trimming limbs off a bunch of trees.  My main goal was to get this one branch that was hanging into our yard, but we ended up getting a bunch of dead limbs and trimming a lot of this one tree with branches that were almost touching the ground and were hanging on the roof some.

Tomorrow I get to burn it all.

We all headed over to the Frazelles’ a little after 4:00 to celebrate Hannah’s birthday.  Michael and I surfed for about an hour and a half.  He took Betty and I took Blue.  When we first went out it was about as flat as a pond with a few small sets showing up now and then.  It definitely picked up though, and I had a lot of fun.  I was catching waves left and right (literally and figuratively) at times.  I’d see a wave coming while paddling out then turn right around and catch it.

Michael said he felt like he was surfing with Barry, alluding to how Barry sometimes seems to catch waves at will.  High praise, to me. 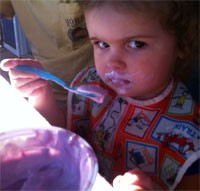 It was time for dinner shortly after Michael and I came back in from surfing.  Milly, who sat on my board again, briefly but in deeper water (by which I mean maybe up to the bottom of my calf) didn’t want to try the food we had there, but she did make a great and hilarious mess of some yogurt.  Christian got some great pictures, but I think something messed up and he didn’t get to save them.

She kept getting up from the table though.  Normally I’d probably try to make her stay at the table, but with twelve people around, I didn’t want her fussing and making a lot of noise.  As a result, my eating was intermittent (I wanted Amanda to be able to spend time with her extended family), not to mention I’d probably have had seconds.  Once I convinced her that she would like cake, I also only got about half of my dessert, but I definitely did go back to get some more of that.