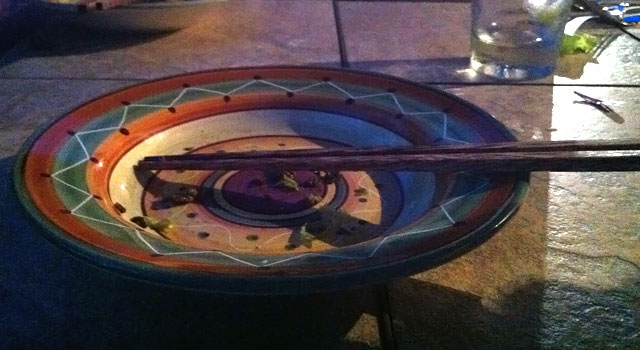 Our small group was treated to a fine dining restaurant-quality dinner by the Ayars tonight.  No joke.  I mean their place smelled like a restaurant.

The first course was what Paul described as sort of a fisherman’s soup.  Honestly, I didn’t like a lot of the stuff in it, but I did give it a try.  I did like the soup itself, which had coconut (or coconut milk?) in it.  After that we had a salad with beef cooked in his wok.  It was all capped off by ice cream sandwiches, as contributed by the Johnsons.

Peyton, Paul and Kim’s girl, took a while warming up to me as she usually does, but I had a fun time playing with her and teasing her.  She kept telling Amanda that she had tricked me when she’d get away from me after I let her go from getting tickled.

We had a really good time though, just sitting out on their patio, eating and chatting.  It’s the last time in a while that our whole group will be together as the Johnsons will be gone for the summer, the Ayars might be away for a bit and Stephanie will be gone for a few weeks.  That leaves us and the Andrews(es?), and it’s tough having small group with only two couples.  We’ll see what happens though.

Milly was pretty fussy today.  She went down for her nap around 10:45, which is early compared to what time she’s been napping lately, and she was only down for a couple hours.  There was little Amanda or I could do to keep her happily occupied.

One thing she did like was pink yogurt.  Amanda was working on some snacks for Milly’s impending birthday party, which included coloring some melted while chocolate and pouring it into a mold.  Milly thought the white chocolate, which was pink with food coloring, was pink yogurt, so she asked for some pink yogurt.  Amanda was just glad she thought it was yogurt and didn’t know it was actually chocolate, so she put a little food coloring in some vanilla yogurt and served it up.  That’s probably Milly’s favorite food now.

About a month ago I set up a site to test a few things out.  It’s averaged about 500 unique hits (individual visitors) per day, which had generated, on average, about 20 cents per day from ads on the site.  Well, yesterday it had almost twice the number of visitors and generated about 50 cents and today it had over 1,000 unique visits and generated 70 cents.

I couldn’t figure out what was going on, so I looked further down in my stat reports to find out where all the traffic is coming from.  The site collects a lot of different information from a lot of different websites, and some of that information is about The Bachelorette.  Apparently a lot of people are looking into rumors about who Ashley picks on The Bachelorette at the end of the season, and an article on my site ranks really high for that in Google.

A lot of people apparently want to see a Game of Thrones family tree, but that’s sadly not as popular as getting spoilers for The Bachelorette.