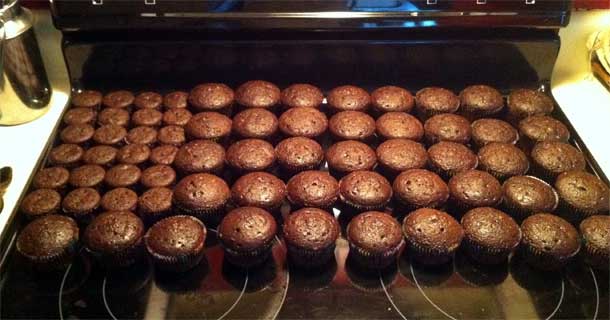 Amanda finished making cupcakes for Milly’s party this weekend.  She also found out that the traditional parental threat of “If you don’t [insert undesired action by offspring] by the time I count to three, I’m going to [insert punishment here] doesn’t work on Milly.

What happened was that Milly was reaching up on the counter and holding the cord to the mixer Amanda had just been using and she wouldn’t let go.  Seriously, when she grabs something in a tight little fist, it can be hard to get our girl to let go.  Anyway, Amanda told her that if she didn’t let go by the time she counted to three that she was going to put Milly in the corner.  Milly said, “No corner,” but didn’t let go, so Amanda started counting.  Then Milly counted “One, two, three,” and let go of the cord.  She either gets it too well or doesn’t quite get it.  Since this is the first time she’s been threatened with a count, I think we lean towards the latter, but it was pretty funny.

Milly was pretty good for most of the day, but she was about to drive me insane this morning.  She kept wanting things or to be picked up or to watch something on TV or to watch something else on TV.  Then she started fussing over nothings, so I decided to put her down for a nap.  Then she calmed down some and asked for yellow ball and yellow flower, so I told her I was going to go get them which for some reason made her start crying again.  I don’t know, I can’t really explain it, but she was just really getting to me this morning.

That said, she was really sweet later on.  Amanda and I were going to a leaders meeting at Port City Community Church and Cyra came to watch Milly.  When Milly realized that Amanda and I were leaving she started to cry, so Cyra, holding Milly, walked outside with us to let her see us off.  Milly actually had this huge smile on her face for a second, and I leaned in to give her a kiss.  When I did that she put one arm out to me, almost like a hug, but then I went to the car and her face just melted.  I know it’s not a big deal, but seeing her go from sad to happy to sad again like that just melted my heart.

I realized in typing that that it sounds like I’m describing the way she was this morning too, but that was different.  There wasn’t any sweetness to it this morning, just crankiness.

The leaders meeting had a bunch of big news, none of which I really need to spout off.  I think it’ll all be revealed Sunday anyway.

Recently, Sony had a big security issue with the Playstation Network, so they are allowing people to download a few games for free.  I accidentally downloaded the same one twice, but that’s fine because of the five they offered, I already have Little Big Planet and Infamous was really the only one I wanted anyway.  I played a little bit of that tonight.  It’s pretty fun so far.  It’s a bit like Assassin’s Creed in that you have an open world where you can climb buildings, but in this one you have electric super powers.

I got bummed out reading A Clash of Kings tonight.  For anyone who might be reading this and also watching A Game of Thrones, I won’t go into any details except to say that my favorite family in the book really has a rough time of it.  I almost think that the thing I just read that bummed me out so will later turn out to be false.  I thought about looking ahead at chapter names (because each chapter is named after the character it centers around) or glancing at Wikipedia just to see if the character(s) I’m concerned about have a future beyond what I’ve read, but I don’t want to spoil it for myself.