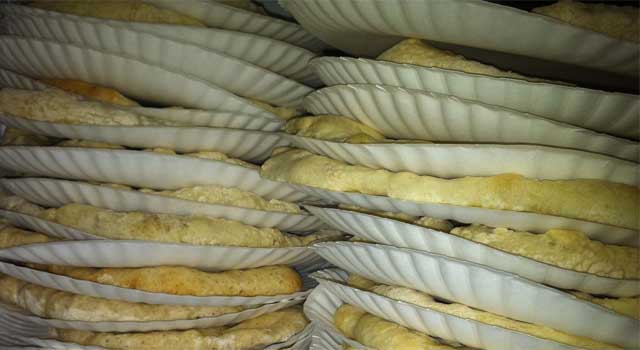 What you see here is maybe half of the nearly fifty pizza crusts Amanda and I (mostly Amanda) prepped today and tonight for Milly’s party tomorrow.  Amanda, inspired by the Hauensteins, thought it would be cool to have pizzas where everyone can choose their own toppings.  We made enough for everyone who said they’re coming to have one, plus a few extras.  It was a bit of a pain though.  Amanda worked on them pretty much all day and I worked on them tonight.

On top of that, I cleaned up a bit outside and we both did a good bit of cleaning and setting up tonight.  That doesn’t include the week or so Amanda spent on making a tower inspired by Rapunzel’s tower from Tangled.  We’ve still got a canopy to set up in the morning plus balloons to pick up.

We almost didn’t get the balloons.  With Amanda having slaved away all day and me having been working until about 5:30, nobody felt like fixing food so we ate at Chick-fil-A.  While Milly and I waited for her Mommy to come back with the food, Milly scolded a flower vase that was at the table.  “Don’t ever!”

Since we were right next to a party supply store, Amanda decided to go ahead and order some to pick up tomorrow, and it’s a good thing we did.  She was told that she was the last person to be able to get any before 11:00 tomorrow.  New Hanover County high school graduations are tomorrow too.

We let Milly go to sleep late tonight for two reasons.  The first is that we want her to sleep in some tomorrow so she won’t be tired for her party, which is from 11-2.  I think if we let her, she could sleep in until 10:00.  That might dismay her grandparents though, all of whom will be here.  Amanda’s parents are coming tomorrow morning and my parents arrived tonight, which was the other reason we let her stay up a little later than usual.

Milly was very excited to see my parents, which was cool.  Amanda was finishing Milly’s bath when they got here.  They brought Adam and Renee’s dog, Dobja, who had been left at their house two weekends ago.  It struck me (not bitterly) that it was funny that Dobja will have been to more of Milly’s birthday parties than the majority of my siblings.

Mom and Dad sat at the kitchen table with Amanda, chatting with us while I finished up the pizza crusts.  (Mine are much uglier than Amanda’s, by the way, but they also didn’t take too long and I have full use of my hands.)  After that we introduced them to the first episode of Arrested Development.  I guess they liked it because my mom asked if they could watch the next one too.