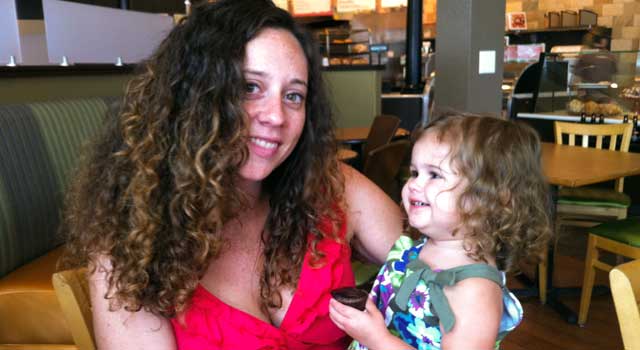 Milly was in a very good mood at church this morning, especially while we were waiting in line at Grow Zone.  She was just very happy and playful.  Probably a leftover buzz from yesterday’s cupcakes.

After church we met up with Erin and Britt and a friend of theirs, Tyler, for breakfast at Atlanta Bread.  Erin bought Milly a little brownie as a dessert to her muffin top.  Tyler took off after we left and the rest of us walked over to Barnes & Noble, where Milly played with the train set and picked out books for Erin to read to her, though she hardly sat still enough to listen to her Auntie Rin.

Milly started letting us know that naptime was approaching, so we took off.  Erin and Britt went to the beach.  Milly was just finally starting to get pretty comfortable with Erin.

Amanda and I watched The Soup then I took a nap for a couple hours.  I got up when Amanda told me that Milly was up, then we headed over to the beach ourselves.  I talked to Erin and she said they had just left a little while before.

Barry and I went out surfing, though I was mostly just paddling and paying dues with Terry.  Maybe I’d have done better if I took Blue, but I want to get better with Terry.  At least I was out doing something active though, and the water felt nice.  Amanda, Anna and Milly were on the beach when I got out, so I played with Milly a bit.  Amanda said she was much more daring about the water today, which was an inconvenient time to get brave because the undertow was kind of strong.

I took Milly out in the water some, holding her close.  She seemed to like it when the water came up enough for us to dip down into it up to our chests or necks.  She also played this game where she stood on shore and commanded me or Barry (when he got out) to run and jump into the water.

Back inside, Anna was tickling and kissing on Milly.  When she finished, Milly gave her a very clear “Don’t ever!” which we all thought was hilarious.

We ate a dinner of sandwiches, chips and corn on the cob and just hung out for a while.  We got home just a little after 8:00 and put Milly down without any problem.  She slept with Lightning McQueen clutched to her.  I’d say that plush pillow toy wins favorite birthday gift so far.  She took it with her literally everywhere today, though we had to make her leave it on the toilet when she took a shower and in the car at church and Mayfaire.