On to Book Three

On to Book Three 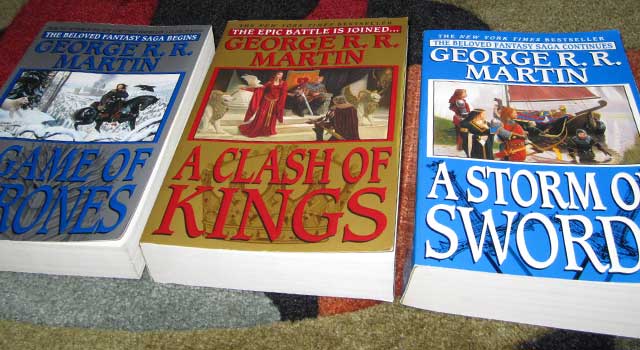 I finished A Clash of Kings this morning and started on A Storm of Swords.  It seems like every time something good is about to happen in this series, A Song of Ice and Fire, things go horribly wrong for the people you get behind.  Such a downer.  I’m hoping things go well in the next book or two.

I haven’t seen last night’s episode of A Game of Thrones yet, but I already knew what was going to happen on it.  Now that it’s aired, I’ll discuss it and my feelings about it in the book.  Ned Stark was beheaded.  That sucked so bad and made me hate that little snot King Joffrey so much.  Michael texted me after he watched it to express the same sentiments.  Three books in and it still bothers me.

At this time two years ago, Amanda and I were at the hospital.  It’s 11:05 as I type this, which means Milly was two hours and five minutes away.  I don’t know exactly what I was doing at the time, but two years minus about an hour and a half or so I was probably in scrubs waiting to be taken to the room where my baby girl would be taken out of her momma.

Milly was really good most of the day today.  She peed a lot, but I think it’s because she figured out where the juice boxes that were left over from her party were stowed away.  Then again, she started out the day with a full diaper, so maybe that had no bearing.

She had a tough evening though, the poor thing.  And poor me and poor Amanda, too.  Milly bumped her head (not hard at all) in the tub and started crying, then she dropped a shampoo bottle on her foot after she finally settled down from that.  I took her out of the tub and she went crazy, screaming and hollering and kicking like a little pink demon.  Eventually we were able to constrain her enough to get a diaper on her then Amanda held her until she settled into the occasional great heaving sob.  At one point I thought she was going to pass out from hyperventilating.

She did calm down though, and I read The Grouchy Ladybug to her.  She was in her normal good spirits after that.  She climbed into bed with Lightning McQueen and Quack, one of her stuffed ducks, and was happily quiet from then on.

I worked pretty late tonight.  I don’t think I was entirely finished until about 9:00, though I did help with Milly and talk to my mom in that time.