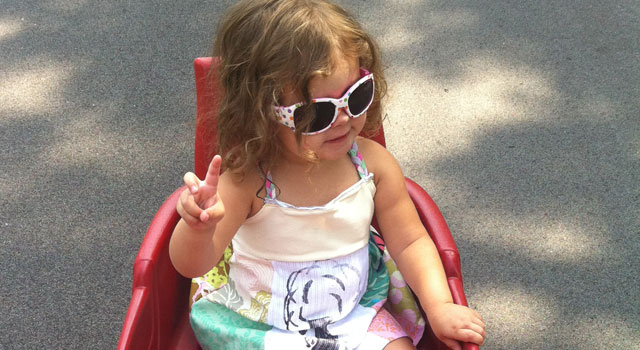 The obvious thing to write about is how neither I nor Amanda can believe that our baby girl is two years old now and to talk about how fast it’s gone by already and before we know it she’ll be 20.  And that all happened, of course.

We had a good day today.  Milly was in a good mood all day, fussing only a little here and there but never for long.  I got her up at about 8:15 and we played in the nursery for a little bit.  When we went downstairs she asked for yellow yogurt for breakfast.  The first one, I noted, was as yellow as her little table, which means that I put more food coloring in it than was needed.

She wanted a second helping of yellow yogurt (which wasn’t as yellow) then a third.  On the third I asked if she wanted to change colors and she chose green yogurt.  She wanted still more after that and went with red.  That one matched her bowl so well that if not for the wet shininess of it, you wouldn’t have been able to tell it apart from the bowl it was in.

We had some Jehovah’s Witnesses stop by, at which point Milly got outside.  She was very talkative with one of them.  She didn’t want to go back inside after they left though, so she got in the wagon and we walked to the cul-de-sac and back.  She didn’t want to go in, but since she was only wearing a diaper I told her we could go back out after we put some clothes on her.

I chose the dress Jenn had made Milly for her birthday.  It was wide at the top and wouldn’t stay on her shoulders at all, but it was really cute so I used a tie wrap to pull the back straps together and that did the trick.  Later on, Amanda sewed it tighter.  Jenn could have made the alteration later, but we wanted her to wear it today.

Anyway, after I got her dressed we walked to the store for a doughnut.  Milly chose an icing-covered honey bun, which she got to eat half of once we got home.  I always tell her she has to wait until she gets home to eat anything we get from the grocery store for a couple reasons.  One is to teach her patience and the other is to make it so she actually wants to go inside when we get back home.

I put Milly down at 11:00.  She wasn’t terribly tired, but she was a little bit and I didn’t want her to stay down too late so we could do all the things we wanted to do with her today.  That was probably the most she fussed today, but it didn’t last long when I gave her a blanket, her paci and tucked Lightning McQueen in next to her.

Speaking of beds and blankets, I don’t know what the deal was but her diaper was soaked this morning and had spilled out onto her sheets somehow.  I guess it was because she’d discovered her juice boxes yesterday.

I was able to get some work done in all that time and after.  Amanda got home with Milly’s present from us- a tricycle.  We hid it in the guest room so we could give it to her when we got home from going out.

When Milly did get up we headed out to Chick-fil-A.  I was talking on the phone with Scott when we left so Amanda drove.  After we ate we went to Brilliant Skies Toy Store at Mayfaire just to let her look at and play with things.  There was a little bit, 14 months old if I remember correctly, who was there with his mom.  We talked to her a good little bit.

Once we left there we went to The Fuzzy Peach.  This was the first time we went that we let Milly get her own cup instead of just letting her have some of mine or Amanda’s.  She enjoyed it, naturally.

A note about The Fuzzy Peach: You can always tell who hasn’t been there before because they put a lot more frozen yogurt in their cups than they should.  The cups are wide and deep, so if you fill it up halfway you’ve got plenty.  It’s brilliant, of course.  We saw two people with froyo coming out the top of their cups.

Back home, Amanda went inside to get the tricycle for Milly.  She didn’t get how to operate it right out of the gate, of course, but I’m sure she will before too long.  We did push her around on it some, but more than anything else she seemed to enjoy pushing it herself.  We’d gotten a doll that Amanda said Milly always looks at when they go to Toys R Us to put in the little basket attached to the front of the trike.  She replaced it with her Rapunzel doll.

After a little bit, Milly’s friends from across the street, Kenzie and Kimber, came home.  Milly played with them until probably 7:00.  They kicked balls, sat on the porch swing, drew with chalk, rode the tricycle (Kenzie pushed Milly on it, anyway) and all rode in the wagon together.  They asked me to turn the basketball goal around to shoot their plastic ball at it, so the basketball goal has been turned around.  It’s at its lowest level, so I can easily dunk it right now.  Since the girls are so small, I have an excuse to keep it that way.  Milly made her first ever shot at a basketball goal, by the way.  Sure, I held her up to the rim, but she still had to get it in there.  100% for my diaper dandy!

Milly got a bath at about 10 ’til 8 then was in bed about half an hour later.  She was in a very giggly mood, which almost makes it harder to put her down because you just want to stay there and play with her.  She was doing this little game where she opens my mouth by the chin so I make a sound, then she closes it and opens it again.  It’s very entertaining to her.

So that was Milly’s second birthday.  She got calls from Adam, Karen and Phil and lots of happy birthday wishes on Facebook.  Amanda and I finished it off with a couple episodes of Supernatural.  I also watched the most recent episode of Game of Thrones today.  I knew what was coming, but man, damn Joffrey.