A Saturday in the ‘Lands

A Saturday in the ‘Lands 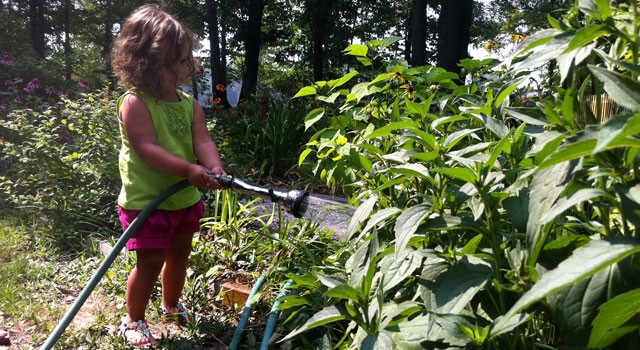 A few days ago, Amanda mentioned going to Richlands Friday and staying the night.  I thought that was silly since we were going to be in Beulaville Sunday anyway.  I said it would be silly to drive up there, drive back the next day then go that way again and back the next day, so I told her we could go up Saturday (today) and spend the night.

So we went to Beulaville to have breakfast with Amanda’s grandparents.  They usually make breakfast on Saturday mornings for Karen (Amanda’s mom), but she was out of town with some of her friends and wouldn’t be back until the afternoon.  While they were getting breakfast ready and Amanda was chatting with them (or something) Milly “come on, Daddy”-ed me to the park across the street from their house.  We sat on the seesaw, swung on the swings, went down the big slide (Milly climbed pretty much the whole way up with me right behind her), played in a little log cabin and chased each other around a tunnel until Mommy came and told us the food was ready.  Milly didn’t want to go.

After we ate Milly went exploring in the house.  She ended up locking herself in Anna’s old room.  After I got it open she had me stay back there with her, where she played with a lamp and the phone.

When we got to Amanda’s parents’ house in Richlands, Paw Paw took Milly to see the big fish they’d added to the little pool in the side yard.  Their Jack Russell, Paddy, got in the water and Milly wanted to get in too.  Milly was shown some foam shapes and Popsicle sticks that she played with for a bit.

Milly and I both took naps while Amanda and Karen went out for a while.  I think they went out twice, actually.  After they got back the second time we had burgers outside on the patio.  It looked like it was going to rain and I felt a couple drops, but we were all done and inside before it got bad.  It didn’t rain long, but it did rain pretty hard.

Amanda’s brother Michael and his girlfriend Jenn pulled up just as we were taking Milly upstairs to bed.  We hurried her on up the stairs because it was already past her bedtime and we knew she’d have gotten worked up if she saw them.

We played Ticket to Ride with them, introducing it to Karen.  I won, though I did play a bit of preemptive offense.  There was one track I took just because I knew Michael needed it, so he had to go around his butt to complete one of his goal tracks.  It might not have mattered, but I knew it was something I could do to make things a little more difficult for one of my competitors.  I did flip a coin on the decision though.  If there had been any cards I wanted to draw at the time, I might not have done it.  Oh well.  I was pretty happy with the win.

Amanda (who placed second) went to bed not long after that.  I read while Michael, Jenn and Karen played another game of Ticket to Ride.  I’m not sure who won because I went upstairs before they finished.

So look, I knew some people who read this watch Game of Thrones so I’m not going to give anything away, but as I was reading A Storm of Swords, the third book in the series, I was absolutely floored.  I seriously considered closing the book (so to speak, since I’m reading it on my iPhone) and giving up on it.  I just couldn’t believe what I read had been written.  I took it back up after a minute, but I just couldn’t believe what I’d read, and it wasn’t like the last time something bad happened where I thought, “Well, maybe that didn’t really happen.”  No, it happened “live” as I was reading it.

I also didn’t think there would be a character I disliked as much as, if not more than, that little snot Joffrey Baratheon.