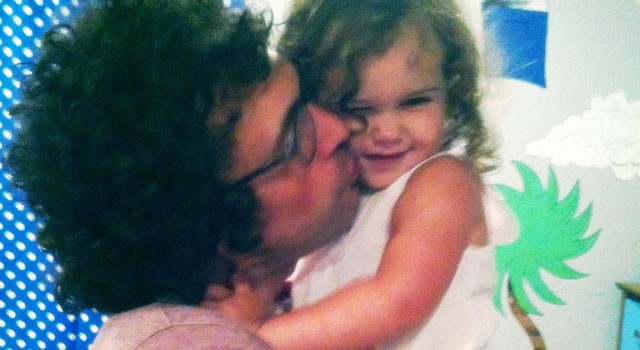 I got a hat and a shirt from my girls for my third Father’s Day.  I honestly didn’t think I’d like the shirt on me when I saw the color; a kind of marbled salmon and gray that gives is almost a purple look at a glance, but it was very comfortable and when I looked in the mirror I did like it.  The hat is a green fedora, but it’s just a little small so I’m going to exchange it for a larger one.  Amanda likes the look on me.

Karen fixed us a breakfast of pancakes, eggs and sausage and I definitely had my fill.  The only bad thing about it was that we didn’t eat until about 11:00 and we were having lunch at Peggy and Earl’s a couple hours later.  After eating said lunch (or supper, if you’re Peggy, but supper and dinner have always been synonymous to me) I felt about as full and bloated as I’ve ever been.  I walked around quietly making myself burp because it felt so good letting out some pressure.

The Frazelles were there in Beulaville along with the rest of us who had been at the Mercer house the night before.  For the most part, everyone lazed around on couches, in chairs and on the floor after we all ate.  I ended up going to the den because there was no room and I wasn’t feeling great anyway.  Milly lead Michael and Jenn off to the park for a little while.

Amanda, Milly and I got home around 5:00.  I’d kind of written off church for the day, but we ended up going anyway.  In part, I wasn’t feeling as ugh as I thought I would from driving home and in part because if we’d stayed home Amanda and I would have just sat around on the couch while Milly did whatever.  At least in Grow Zone she was able to play and get some energy out.

I think we might have gone to the 6:00 service at Port City Community Church just once before (unless that was the 4:00).  It wasn’t the most crowded and Grow Zone seemed nearly deserted, but that wasn’t all bad.  If I didn’t like having a full, relatively obligation-free day ahead of my on Sundays I’d consider going to the 6:00 more often.  And of course on most Sunday evenings we’re hanging out with the Frazelles anyway.

When I went to pick Milly up from Grow Zone I saw that she was playing with Eli.  We saw his dad, Nick, just as we were about to walk out the doors of the church.  Amy and Eli joined us before long.  The kids, Nick and I rode the elevator  up then down and then Milly and Eli ran a good two-thirds of the length of the church before Amanda and I caught up to them and turned them around.

We got home at 8:00 and put Milly to bed without incident then watched Arrested Development.  We’ve only got four episodes left.

I talked to my dad briefly on the way home from Beulaville.  It crossed my mind at one point that I couldn’t call his dad or my mom’s dad anymore to wish them a happy Father’s Day.

PrevPreviousA Saturday in the ‘Lands
NextThe End of Arrested DevelopmentNext