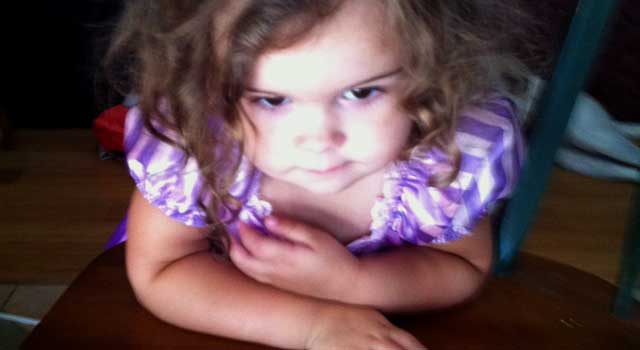 Milly found the Rapunzel dress the Hauensteins gave her for her birthday and decided to put it on today, then she decided to watch Tangled.  I put both of them on for her.  Milly started out by pointing our Rapunzel’s chameleon friend, Paschal.  Then, as Rapunzel started to sing When Will My Life Begin, Milly said, “Ponzo peety.”  That meant “Rapunzel is pretty.”  I just thought it was so cute.

Of course, I couldn’t get any good pictures of her because she wouldn’t hold still for me or give me a good picture angle.  She looks so serious in the picture above, doesn’t she?  Girl means business.

Amanda took Milly in for her two year checkup.  They had to prick her finger to take some blood, and Amanda said Milly was actually fine with it.  But then they said they didn’t get enough or didn’t get the right spot, something like that, and had to prick her again and that one set her off.  Poor thing.

We had dinner with the Ayars tonight.  Half our small group is out of town and poor Noah has pinkeye, so the Andrews’ babysitter wasn’t going over there.  After next week only they and we will be the only couples in town for a while.

We had a good time with Paul and Kim though.  Paul, Peyton, Milly and I were in their little pool for a while.  It’s shallow enough that Peyton can stand and I think Milly almost could stand on her own on her tiptoes.  She kept wanting me to let go of her so I let her swallow water a few times.  She ended up standing on the ladder holding the hose Paul was using to fill the pool back up some, which entertained her.  With all the hundred degree days we’ve had lately I guess a lot of water had evaporated.  It felt real nice in that pool though.  It was like bath water.

We ate tacos for dinner.  Peyton was really good playing with Milly. It’s nice because the whole way over Milly kept saying something about swimming and Peyton.

I finished A Storm of Swords last night.  I was really fighting to make myself stay awake to finish it, but I wanted to be able to say I read it in a week.  I also read A Clash of Kings in a week. I think A Game of Thrones might have taken me a little while longer, but we were visiting with the Lambeths when I started that one.  I went ahead and started A Feast for Crows this morning.  I was pretty busy so I didn’t get too far into it, but so far it doesn’t seem to be focusing on the characters we’ve already come to know very much.

I did take a peek through the title chapters and noticed there was no Jon chapter, which is odd since he was in a pretty interesting situation the last time we saw him in A Storm of Swords.  There also weren’t many Arya chapters, and she’s one of my favorite characters.  Also a little different in this one from the rest was that there are several chapters that are people, but don’t name the people, such as The Prophet and The Reaver.

The next book, A Dance with Dragons, comes out in a few weeks, so I’ve got plenty of time to finish A Feast for Crows.  That said, I’ll probably eat it up in a week as well.