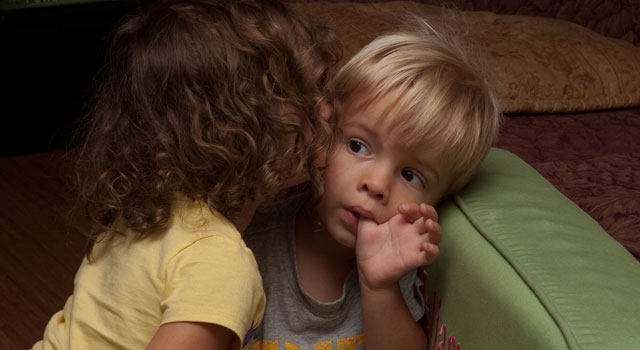 I’ve come to the realization that my girl is a little bossy, or demanding at least, when it comes to playing with other kids.  Not in a bad way, but still, she seems to want to have attention paid to her.

Amy dropped Eli off this afternoon so she could go do some work, which is something that we’ll be doing every other week during the summer I think.  Milly was extremely excited to see Eli, but their nap schedules conflict a little.  Milly naps until about 1:30 or 2 and Eli takes a nap from about 2 to 4.  So they played a little then Eli took a nap then they played a little and Eli left.

They, or at least Milly, had a good time while they were both together though.  Getting back to the bossy thing, Milly, as I said, was very excited to see Eli.  After he got up from his nap she kept trying to get him to play with her.  She gave him toys, talked to him, tried to sit with him in her chair, gave him hugs and a kiss, all sorts of things.  I guess it’s true that if you ignore a girl she’ll keep trying harder to get your attention.  Hmm, I’m going to have to warn her about that sort of thing for when she gets older.

Okay, so none of that was particularly bossy, but there were a few things.  Milly and Eli both required diaper changes, and after Eli’s was changed he just sat on the floor.  Milly kept telling him to stand up and tried to pull him into the tent.  (Backing up a second, I jokingly asked if she wanted to help me change his diaper, so she picked his up and unfolded it then kept talking to him about it.  She also said “icky” when she saw what was there for the changing.)  Eli was sitting on the couch a few minutes later sucking his thumb and Milly pulled his hand out of his mount and told him no.  She wasn’t mean about any of it and it was actually pretty cute.

Eli, meanwhile, just wanted to play with some of her toys and watch Lilo & Stitch.  That’s what he’s doing in the picture at the top there, trying to watch a movie he hadn’t seen before while this girl is getting in the way with her silly kisses.  One day, Eli, you’ll have your priorities straight.

I was mostly working while they were playing, but Amanda was working on dinner while also watching the kids so I poked my head in now and then.  Plus I wanted to watch them play.

Nick and Amy both came to get Eli together.  They stayed for a few minutes to chat then took off.  Milly did a good bit of emulating Amy while she was talking to Amanda in the kitchen.  When Amy put her hands on her hips, Milly would do the same.  When Amy folded her arms across her chest, Milly did that too.  Milly also blabbed a bunch of conversational-sounding nonsense at her.  After they left Milly kept saying, “Bye Nick Eli.  Bye Amy.  Bye Amy Nick.  Bye Eli.”

Billy Supplee came by a short time later for dinner.  He’s moving to Charlotte soon and recently became engaged, so we wanted to see him before he took off.  We had white chicken chili and Milly was very chatty with him.

After Milly went to bed Amanda and I watched an episode of Supernatural.  We’ve got one left for the season.