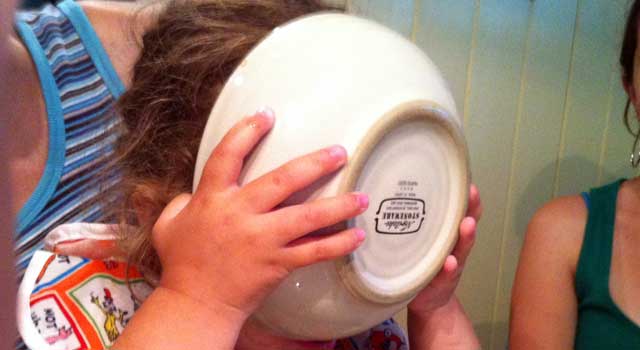 Milly entertained a pretty good-sized crowd tonight during dessert.  We were at Anna and Barry’s and were all eating ice cream (well, chocolate-vanilla swirl frozen yogurt, technically) and Milly wanted more, but there was no more.  She did have the melted remnants of some at the bottom of her bowl, so Nana picked it up for her to drink, as she does milk from cereal bowls.  Milly buried her whole face in the bowl and made such a mess of herself that everyone offered up their bowl to be next.  Milly enjoyed herself, but I think we all enjoyed watching her face disappear into the bowls even more.

Aside from that it was our pretty average Sunday.  Church, Atlanta Bread, Barnes & Noble, a nap for Milly.  Amanda and I had already watched The Soup from this week, so that was pretty much the only thing we changed.

We’re pretty sure the upstairs AC unit is toast.  Amanda texted Don about it and he said it sounded like the capacitor was out (not an expensive fix) or the fan motor was out (a much more expensive problem, and apparently the more likely one).  On the plus side, it’s better that it’s the upstairs one and not the downstairs one since we spend most of our time downstairs and it’s cooler at night, which is when we’re upstairs more.

I decided to start on Mass Effect 2 today.  I go through these phases where I don’t play games much for a while then I play them a good bit.  Given that I’m also trying to finish some books and get some websites going, it’s probably not the best time to start, but I wanted to.

While I was playing that it started pouring down rain really hard.  The power blinked before the rain actually hit us, but it was much needed.  It lasted a good little while too.

After Milly got up we went over to the Frazelles’.  Milly likes to listen to Tear Me Up in the car, which is the first track on the Rio Bravo album Fences.  Since I knew we’d be listening to that the whole way over I decided to see how many Tear Me Ups it would take us to get there.  The answer is about seven.  We made a stop at Banana Republic to use the gift card from yesterday to pick up some shorts.

Anna and Barry went out on the beach with me, Amanda and Milly.  Barry and I took Milly out in the water where we had her stand up on Blue, though she wasn’t too sure about it.  She did enjoy being out in the water though, and she screamed with laughter every time I jumped a wave with her.

Barry and I went out surfing after I took Milly back to shore.  The waves were kind of small and considering the quality it was kind of crowded, but I caught a number of nice easy waves that I was able to ride a long way in.  I had to bail on one when I was taking a left and another guy was taking a right.  It’s hard to say who had the right of way because it was a long wave and we’d both been on it a while, so we didn’t start out near each other or anything.  As far as I know, we might have even started out on different waves.  When we both emerged from the water I told him, “Sorry, dude, I didn’t see you.”  He just said, “I thought you were going right.”  Uhh, I’d been going left on that wave for like twenty minutes. (<-exaggeration)

No biggie though.  Later on when I’d gotten out to play with Milly I saw two people going right (my left).  I didn’t see who had the wave first, but there was a girl who was farther out on the wave and a guy behind her.  He was almost perpendicular to the shore, so his angle was moving him along faster and it was obvious they were going to hit and sure enough his board went right over top of hers.  Nobody was hurt, thankfully.

As Amanda, Milly and I were heading back we ran into Michael and Jenn, who had decided to come by.  A little while later Karen showed up.  She had decided to come tonight to watch Milly tomorrow, ostensibly to help me out.  The Frazelles had a good number of dinner guests.

Kirsten and I went looking for Milly right before we all started eating and found her out on the porch.  Our clue was an abandoned cup right next to the doggy door.  Yes, she crawled out of the doggy door to get outside.

Amanda rode home with her mama and I took Milly in our car.  She wanted “Mo See See Uh,” but, as much as I do like the album, I was ready to listen to something else.  I plugged up my iPhone and went through a random selection of sings until we got to Queen’s Crazy Little Thing Called Love.  She seemed to enjoy it.

At home Karen was unloading things from her van and Milly was moving the car seat from the Jetta to the van, leaving me to get Milly ready.  She protested going upstairs for a minute, but she was tired and that died out soon enough.  Her diaper wasn’t at all wet, so all I had to do was brush her teeth.  When I came back to her room from getting her toothpaste and toothbrush she had already put herself in her bed and pulled the covers over herself.  I let her sleep in just a diaper since it’s hot upstairs.

Back downstairs we watched  Best of Will Ferrell SNL video on Netflix just to kind of pass the time.  I mostly read in A Feast for Crows.  Honestly, while I enjoy the chapters about the more established characters, Jaime and Cersei, Sam and a few of the others, I miss a lot of the other ones.  I’m looking forward to getting to catch up with them again, even if I have to wait until the next book, which comes out in a couple weeks.