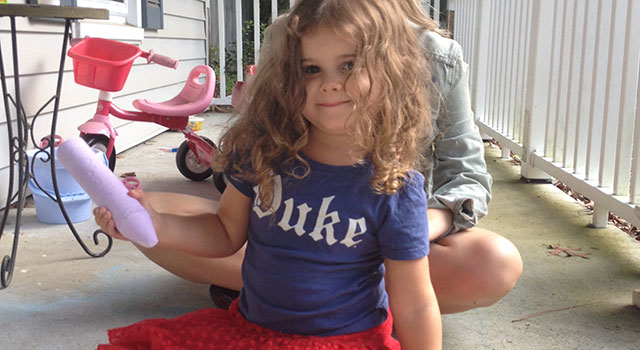 This picture is the last picture taken of my two-year-old, because at 1:10 in the morning, said two-year-old will have turned into a three-year-old.  I took it as Amanda and I were leaving for small group, because I realized I would never see my Milly Bug as a two-year-old again.  I’m being overly sentimental about it.  I asked her yesterday if she could stop growing and she answered “Nope.”

She wanted to be naked this morning, as she often does, so I let her.  We ate oatmeal then she wanted to watch Toy Story, so I put that on while I got some work done.  I went in during the final scene, which has snow, and after the movie she said, “Daddy, let’s play in the snow.”  She got up and started going around the room, so I told her okay, but we’d have to get dressed because it’s cold in the snow.  We put on a pretend coat and pretend gloves and pretend socks and boots and a pretend scarf and toboggan.  Then we made pretend snow angels in the pretend snow and built a pretend snowman and decorated it with a face and hat and arms.  Then we made pretend snowballs and threw them at the bench.

We needed presents to put under the tree, of course, so we pretended to wrap presents.  Then it was Barbie’s birthday so we made and baked a pretend cake.  When I asked her how long we needed to put the cake in the oven for, she told me “Three seconds.”  I was impressed that she thought about seconds.  She did press the buttons on the microwave for me when we made our oatmeal this morning, but I don’t remember saying “seconds”.

Soon after that we went to the office and swam around as a mermaid.  She saw Nemo, Dorrie and Marlin and played catch with them, which means she threw the ball in some part of the office and I swatted it back to her.

Shortly before nap time Milly noticed one of the Rock Band guitars and wanted to play with it, so she went to the living room to play it and wanted me to play pretend drums.  I turned on The Distance and she told me to put it on the iPod dock, so we jammed out to that then she peacefully went upstairs and took her nap.

It was a fun morning.

Amanda’s bridesmaid dress for Hannah’s wedding came in today.  It’s a cute dress, but the top of it is a little off.  It’s hard to describe, but basically the bust line is crooked, like there’s more material on one side than the other.  I think she’s going to talk to Jenn to see if she thinks it’s fixable, and I guess if it’s not she’ll need to return it or something. 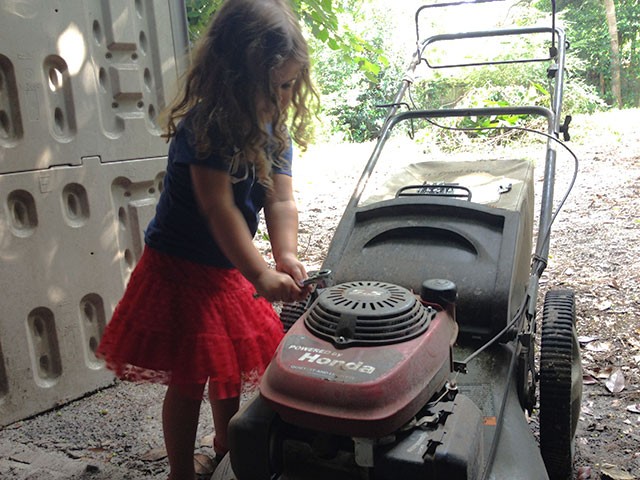 Amanda and Milly went to do some running around and I did the same, going to the bank and then Lowe’s to get a socket wrench extension.  I ended up getting a whole set because it was on sale for a buck or two more than the extension itself, and I figured it couldn’t hurt to have an extra socket wrench.  I wasn’t home long before Amand and Milly got in, so Milly helped me loosen the top of the lawn mower to make sure I had what I needed.  It worked, so I’m planning on fixing the pull string tomorrow and mowing while Milly’s napping.  The yard is in desperate need of a trimming.

I’m actually hoping to get by without having to work tomorrow, so I can make the day as special as I can for her.  We’re going to give her her big gift, a scooter, when Amanda gets home so she’ll have plenty of time to play with it.  Then we’re planning on going to Islands for dinner.  We asked Milly if she’d rather have chicken nuggets or a taco for her birthday and she said taco.  Unless she changes her mind, that’s what we’re doing.

Milly cleaned out another house in The Sims today.  Amanda did convince her not to sell the front door at least.  All her Sims were in the one room that had a door on it still and, as little money as she had left, they probably would have all died.  That would be sad because Ken Woody II and Horse Skirt are now in a committed relationship.  I did that to them last night after Amanda had the idea of moving them in together so that Horse Skirt’s house was the one Milly decided to “buy away” everything yesterday, leaving her with literally nothing in the house.  I think we’re about done trying to keep her Sims alive at this point.

I went for a jog this afternoon, but I wasn’t totally pleased.  My legs started out tired and I tried to ignore that as best I could, but I got 1.7 miles before I started alternating walking and jogging.  Then I started feeling raindrops.  They weren’t bad at first, but the frequency was picking up some.  Even though the sky looked fine, I figured it might be best to get back to the house before it did start raining more, so I finished the cul-de-sac I was on and went back home, finishing with less than 2.5 miles.  It never did noticeably rain.

Tonight we had grilled hot dogs and other food and hung out at the Sawyers’.  Jennifer was surprised with a few baby gifts.  The look on her face when she put together that we were giving her gifts was so sweet.

As tends to happen, our group split down the sex lines, with the girls in the living room and the guys in the dining nook.  You know, it seems those are always the locations.  Anyway, the girls, I think, mostly talked about kids while we guys talked about entrepreneurial ideas, tattoos and zombies.  Actually our zombie conversation did leak over into the living room.

When we left Jennifer and David tried to make us take some leftovers home with us.  Amanda protested, citing all the food we were going to have at the house over the next few days, which we already don’t have room for.

When we got home Kirsten was telling us about how much Milly was using her imagination.  They played in castles in Milly’s room, though Kooky had to stay in her castle, which was a small area of the room.

Amanda received a promising email that is indirectly related to a good phone call she had the other day, though she was a bit torn about the part that related to it.  And again, no, she’s not pregnant.  I don’t know how that would at all fit into the previous sentence, but I thought I’d put it out there anyway.