Today’s been a nice day so far. As far as work Fridays go, this one was one I haven’t had in a long time- one that wasn’t constantly busy up to the end of the day. In fact, it was pretty relaxed, all in all.

When we were at the beach over Labor Day weekend, I Photoshopped a picture of Amanda’s cousin, Kirsten Frazelle, to be something like the cover of a horror movie. Silent Hill I think it was. I also did one for Anna Hawkins Dulaney, another cousin. I’ve been meaning to play with pictures that way some more, so I finished one of myself today. I’m pretty proud of it. My friend Jason Revill, who was the first person to give me feedback, said he was a little bothered by it because the other two pictures weren’t as “posed” but he also said it might just be that the picture is me and he knows me. He said it was good, but he likes the other ones I did better. Amanda saw it and said it was really creepy. I put it on my MySpace account (but not as the main picture) and I’ll put it here for you too. 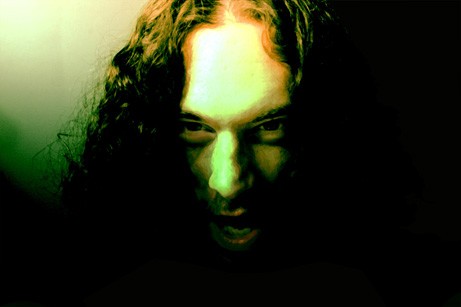 Feel free to leave comments. The other pictures, like Jason said, were less posed. This one is a little too angry and active to be really a zombified picture, but you get the point.

Amanda got off work a few minutes after 4:00. We picked out clothes to take to Rougemont last night, so I threw everything in our smaller suitcase and we left sometime between 4:30 and 4:45. Michael’s girlfriend, Sarah Denning, was just pulling up to the house as we were leaving.

On the way to my parents’ house we were listening to the Top 20 XM station. There’s a song, Lips of an Angel by Hinder, that Amanda’s been wanting me to hear for a week or two now that she says, and has been backed up on, sounds like it has some late 80’s/early 90’s rock influence. She knew it would be on the Top 20, so we listened to most of that until the song came on, and yes, it does seem to be influenced by the heavy guitar and growly performance of said time period. There was even a guitar-laden instrumental in it.

I also got to hear Do Your Chain Hang Low. Man, some songs…. “Do your chain hang low/Do it wobble to the flo/Do it shine in the light/Is it platinum is it gold/Could you throw it over your shoulder/If ya hot it make ya cold/Do your chain hang low.” Seriously? Yes, seriously, and yes, it was sung by a chorus of children to the tune of Do Your Ears Hang Low. You know, I do like some rap songs, but it seems like some rappers (I’m talking to you, Jibbs) will take anything and put a beat to it. And no, it’s not just rap, but this seems to happen more with rap than in other genres. Of course, all that being said, I was thoroughly entertained.

We got to Rougemont
Out to eat
Stomach hurt