I went to bed pretty early last night and, as a result, woke up earlyish today. I didn’t do the elliptical machine though, because I was finally feeling pretty sore from putting down the floors.

I really liked walking downstairs to see not only my shiny new bamboo flooring, but the new layout of the room. It’s much more open and inviting.

Anna Frazelle, Amanda’s aunt, called today to invite us over for dinner. She said after such a busy weekend we needed to have someone give us a nice home-cooked meal.

Work was decently busy, but not as busy as a lot of past Mondays. It went by pretty fast.

I called Brian Gibson, the house’s previous owner, to tell him we’d put down hardwood floors. He was excited for us. He sounded pretty happy too. He’d made a few decisions about things to do in his life and said he and his wife Angela had prayed long and hard about it and feel they’re going in the right direction. I wish him the best.

Rob Peterson’s dad went in for back surgery today and is expected to have a pretty lengthy recovery time. I havent heard how things went yet, but he’s been in our prayers.

I got an e-mail from my cousin Jeff’s ex-wife Becky, who said that he daughter (the only one of four that’s not blood-related to me) got a scholarship for Western Kentucky, which is great. The only downside is that her first career choice is drafting or something of the like, which they don’t offer there, and her second choice, which they do have, is elementary education. One way or the other, I wish her the best as well.

After work and whatnot, Amanda got home and we, along with my brother-in-law Michael Mercer, left pretty shortly thereafter to go by Target and exchange the messed up set of lights and get a few other things, like kitty litter which we are dangerously low on. For the exchange, since we were getting some other things as well, the lady at the desk just gave Amanda a gift card with the purchase amount of the lights on it. At checkout though, we discovered that the lights had been on sale when we bought them and therefore we couldn’t do an even exchange. The matter was solved pretty promptly, but Amanda was very annoyed by the attitude of the girl at the checkout. She had to explain the situation like three times before the girl got someone to help out, then Amanda said the girl rolled her eyes when Amanda thanked her. We discussed that for the better part of the trip over to the Frazelle’s.

When we got to Anna and Barry Frazelle’s house we presented Barry with a late birthday gift, which we had just picked up. It was the first season of The Office on DVD. The Frazelles had gotten into the show a little late and hadn’t seen any of those, so they were pretty excited by the gift. They in turn gave us a belated housewarming gift of a mirror Amanda had mentioned to Anna that Anna had already thought about getting. It’s very nice and will go well with the rest of our decor. It’ll likely go in the center of our living room.

Anna made turkey, rolls, salad and chocolate pie for us for dinner. 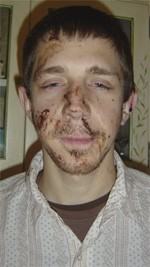 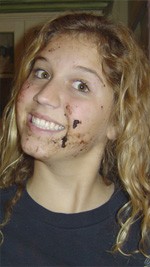 Afterwards I convinced Michael to put his fork, with some pie on it, next to his cousin Hannah’s face then tap her shoulder to try to get some of it on her. That didn’t work too well, so he ended up smearing some on her face. Not being one to back down so easily, Hannah put some chocolate pie on her fork and tried to get Michael back. Realizing that someone was going to lose an eye, they were eventually both convinced to drop the forks, but then Hannah took some pie up and manually smeared some on Michael face. A melee ensued and after several minutes both of them had chocolate all over their faces and, in Michael’s case, in their ears. Kirsten got in on it a little bit, and after they had mostly cleaned themselves up Michael and Hannah worked a little bit with boogers they’d wiped onto the paper towels they were cleaning up with. It was great fun.

We left after some time and got back home. How I Met Your Mother was a rerun, so that was one less thing to catch up on. Amanda and I put up the rest of the lights while Michael watched football. I lost my fantasy football game this week by just a few points, by the way. On Sunday I’d sat down to put Cory Dillon in as my running back because Frank Gore’s playing status was in question, but I was about five minutes too late in doing that. Dillon had 20 points this week and Gore had six. I’m probably not going to any playoffs because of that. Oh well- my only goal was to do better than Michael, and by losing I may have messed up his chances anyway.
At any rate, we’re planning on putting up the ornaments and probably the lights tomorrow.

Amanda went to bed after Heroes (which was a really good episode where a few more people meet up with each other and one person gets killed). I stayed up and watched a couple episodes of Boston Legal to clear out some DVR space. Boston Legal… sometimes that show is a little over the top, but it can be so far out there, and so tongue in cheek that I can’t help but enjoy the quirkiness.