Nick and another staff member friend of mine were kind enough to treat me to lunch at Krazy’s today, which was really great of them.  I got a lot of e-mails and Facebook messages expressing condolences, even from as far away as Italy.

Today was a good day, which I count as a gift from God.  Not only was there an outpouring from friends and family, but it was also just a very pretty day here (though it rained in Kentucky).  On top of that there were a couple situations at work that I thought would be complicated that turned out not to be.  It was overall just a nice day, which helped my mind. 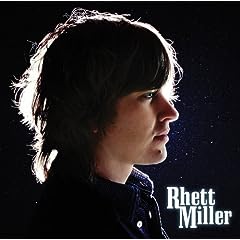 While I was out and about I picked up Rhett Miller’s new self-titled solo album.  I have yet to be able to give it a good, thorough listening-to.

After work Amanda and I went to our last birthing class, which was held at the hospital so we could have a tour of it.  Most of it, as many friends as we’ve had who had babies recently, we’d already seen.  There was also a discussion about labor and what goes on after it, which sounded scarier to me than the delivery itself.

Before the tour, Christy Little, who hadn’t seen us yet, was talking to another couple about being tired of waiting at five and six weeks.  That’s when I spoke up and said we were three days late, which won us a No-Prize.

Amanda had called me while I was at lunch to let me know of a development.  It wasn’t a contraction or anything like that, but I think it is a definite step in the right direction, though every pregnancy is different and things happen at different times for different women.  It’s something that neither Amanda nor I knew abou concerning pregnancy and the name o fit is kind of gross, especially since it’s apparently grosser in fact than what I even imagined it to be, so I won’t say what it was.  The point, though, is that it’s happened and the baby has dropped some and things seem to be happening.  Amanda said before she went to bed that she thinks it’s going to be soon.s

Jason Revill thinks so, too.  He told me today he thinks Amanda will be in labor within 24 hours.  In fact he’s leaning towards before sunrise and feels sometime between 3-4:00 this morning.  Then again, he also said Amanda would have a black baby, so we’ll see how accurate his predictions will be.

On the subject of Milly, Amanda and I have been discussing tweaking her name.  We’d still call her Milly of course, but the full name we’ve been going with is Melia Mae (though I think May looks better) Dotsey.  Amanda is afraid people will pronounce it Muh-lee-uh instead of Mee-lee-uh (Amelia without the A).  So we’re considering Omelia.  She also likes the idea of adding Leigh (Amanda’s middle name before she got married) to Mae to make it Maeleigh.  It’s an odd looking name typed out, to me, and at first I didn’t like it, but then I realized I was putting the emphasis on the Leigh part, when it should be pronounced like it rhymes with Hayley.

I just looked up Omelia on a baby name website and it didn’t find it, although Amanda has seen it before as an alternative for Amelia.  The fact that it’s so rare makes me like it more.  Maeleigh, in various spellings, isn’t there either.  I think I like Omelia Maeleigh better than Melia Maeliegh, as the second put too much emphasis on the M sounds and sounds to me like a character in a kids’ book.  Omelia Maeleigh Dotsey.  Maeleigh Omelia Dotsey.  Hmm.  I kind of like that second one, but if her first name was Maeligh and we called her Milly it might be pretty confusing.  Dangit, why did Amanda have to bring so many ideas in this late in the game?

The one thing we know is that we’re calling her Milly, so that’s that at least.

My phone flashed with a phone call for a split second a little bit ago.  It was my dad, who had driven up to Cincinnatti to pick up Uncle Tom and Parker, my cousin.  Uncle Bernie was with them.  I called him right back and he said he had started to call but then thought it might be too late.  He just wanted to see how things were going and whether there was any new news.

Speaking of parents, Amanda talked to Karen tonight.  She said she saw a fawn born in the yard and was going to take a picture but the battery was dead.  For some reason she never got around to charging the battery, even though she had all day apparently to do it.  Of course, my thought was that she should have had it charged for the baby already anyway!  But it was really cool- she got to see the fawn stand up for the first time.

Aunt Robbie had called to see how I was doing with the Pap situation and all.  She said she wasn’t able to go to the funeral either, although she acknowledged that my situation is a bit tougher than hers.  I talked with her about the name (Melia being her middle name) and in the course of that she told me that I had almost been named Brandon.  I asked Dad about that when I talked to him and he said Brandon had been a passing idea, but I was nearly an Ian.