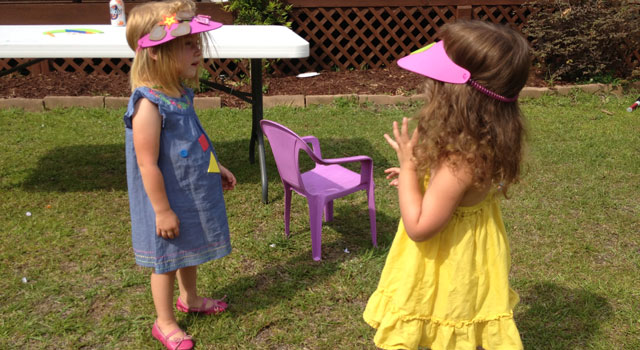 It was a bit warm today, but I mowed the lawn anyway.  Last time I mowed was two weeks ago, but it looked like  a month.

I learned something new about Milly after I finished, and that’s what she won’t give me a kiss while I’m all sweaty from working in the yard.

Anyway, after mowing and getting some water I Went back out and swept up a bunch of leaves and clippings from the porch, the driveway, the sidewalk and the back patio.  We may mostly grow weeds and sand, but our weeds and sand look much better now.

After Milly got up from her nap we went to Brilliant Sky so she could pick out things for her birthday box, which is basically a gift registry.  You let the kid go around put put stuff they like in a big plastic bin.  I think it’s a great idea, except of course they want the stuff right then.  Milly seemed smitten with a few items.  Once was called Princess Bath or something like that, which included a bunch of princess things (like a wand and a tiara) for playing with in the tub.  There was also a hovering disk with a soccer ball design on it that she played with for a long while.  We got some things for Ayden Hauenstein’s birthday (party is a week from today) and when we were checking out Milly walked up and put a big bottle of bubbles on the counter as if to say, “Go ahead and grab this while you’re at it.”  The nonchalance of her action made me laugh.

Amanda had gone out shortly after I finished up the yard work and I tried to call her suggest that she pick up a smoothie, but I couldn’t get ahold of her so I didn’t get one.  The thirst for a refreshing icy beverage stuck with me all day though, so while we were at Brilliant Sky I told Amanda I was going to get a smoothie.  I checked Atlanta Bread and Starbucks and neither had any kind of smoothie that I wanted, so I ended up getting a caramel frap without coffee.  When I walked back in the store with it Amanda pointed out that if I’d waited 15 minutes I could have gotten it half off thanks to a promo Starbucks is having right now.  After we left the place she got one for herself and one for Milly then we headed to the Nowaks’.

The Nowaks were having their annual Derby Party.  While Amanda was out she’d bought hats for herself and Milly, both of which they can each wear aside from just for today.  Milly was very social and played with Lauren quite a bit.  Well, tried to anyway.  Lauren wasn’t as interested in playing with Milly as the other way around, but even though they’re only a couple weeks apart in age and have basically known each other since birth, today was the most they’d really played together.

Henry Nowak saw me as soon as I walked in the backyard and immediately told me I couldn’t catch him.  Ever since I first met him he’s loved it when I chase him.  I think it’s cool that he has some kind of association with me.

It was good to see Mike and Sarah.  I was just mentioning the other day that I miss hanging out with then.  Mike took a few minutes to show me his office and told me he thought it was great that I had decided to go out on my own.

The Derby race itself was quick and exciting.  One horse, Bodemeister, was in the lead the whole time until the very end until another one, I’ll Have Another, passed him and won pretty handily.  (I love horse names, by the way.)  There were a good twenty people or so in the living room getting really into it and making noise, which ended up scaring Milly.  She hung in there until the race was won at least, then we went outside because it was too much for her to take.

It reminded me of the 2010 Elite Eight Duke vs. Baylor game that she, at nine months old, was present for while Amanda and I watched it at Seth and Dana Holloman’s house.  Randal Kennedy was there too, and Duke finished the game up strong after a very tight contest, leading to a lot of whooping and hollering.

We went home pretty soon after the race and put Milly down a little early then caught up on some TV.  It was warm out all day today, and sometimes just being in the sun can tire you out.