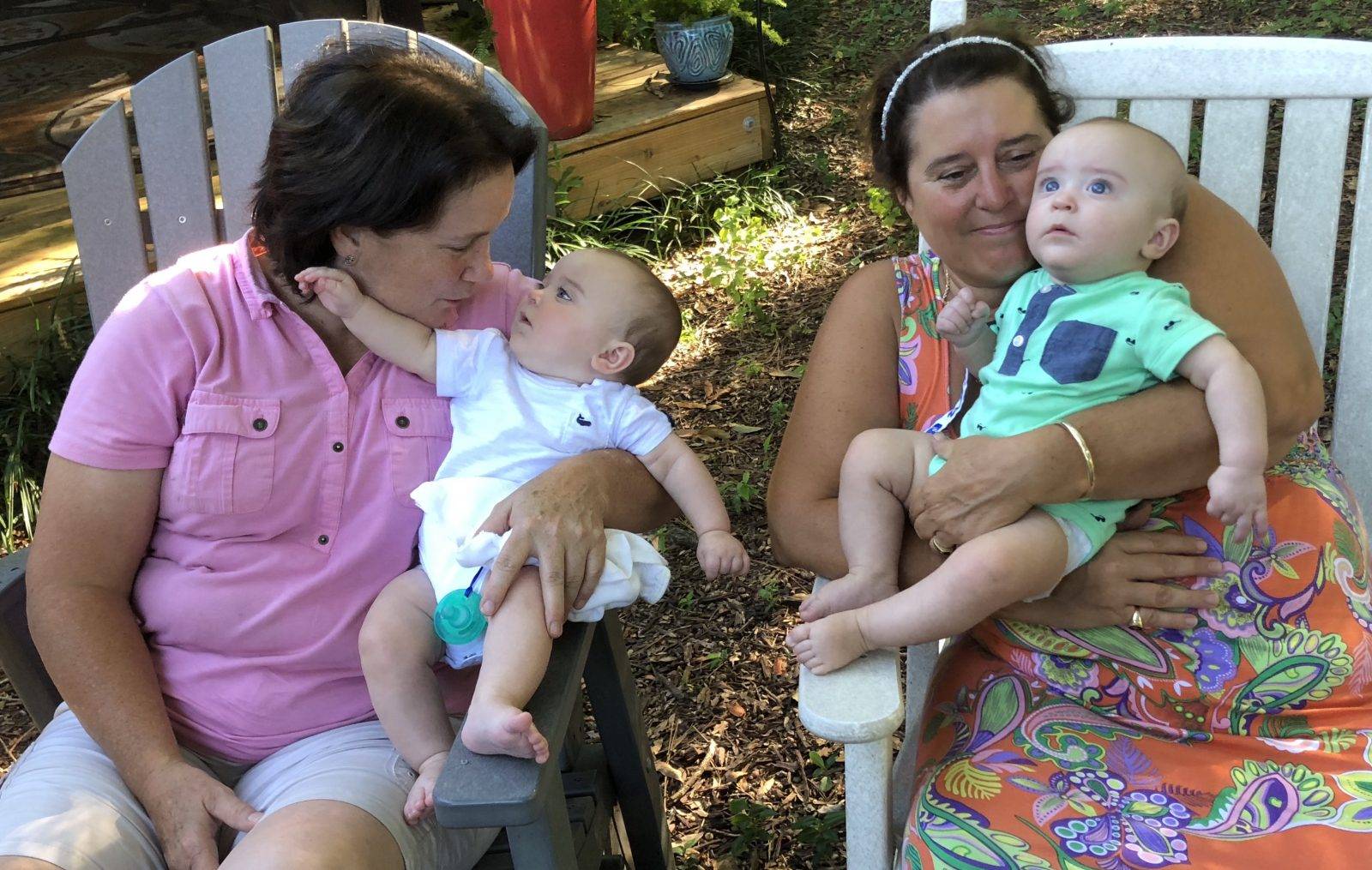 Looking back on the past few Labor Days, I lamented to Tristen this weekend that we used to travel. Well, we didn’t last year because Tristen was just finishing up her first trimester and wasn’t feeling great anyway. This year it would have been hard to go anywhere with two six-month-old babies. We did have a really good extended weekend though.

Our friend Steven told us a few weeks ago in a group text that he was going to be in town and wanted us to meet his girlfriend. Figuring people might spend too much time trying to thinknwhatnto do, indecided we’d have a cookout and invite a bunch of people over. With the boys, we don’t get to see everyone too often these days.

Tristen didn’t feel like getting everything in order here st the josue, so she asked her parents if they’d mind having it at their place, which they were happy to do. Craig loves cooking for groups. They invited some of their friends, and my parents called a few days ago to see about coming down for a visit, so they cane too.

That was all stage setting.

On Saturday, Johnny and Torrie stopped by. We were going to go to a Wilmington Pride Celebration event with food trucks and such, but it was really hit, so we instead went to a restaurant called Foxes Boxes, wgivj we really enjoyed. It’s a cozy place with a very friendly owner and a creative menu. Tristen hit a turkey slider and a falafel slider and I got a waffle, egg, and bacon sandwich. It took me a minute to figure out how I wanted to eat it. I bit into it like a sandwich at first, but then I cut it up and ate it with a fork.

Fawkes and Phoenix were pretty good and a few people talked to us and them.

After that we got some ice cream at Boombalatti’s. Sebastian and I got the same kind- birthday cake. (I mean, it tasted like birthday cake.) Fawkes got to have his first taste of ice cream, which was a sample of Uncle Johnny’s, although I can’t remember the exact flavor right now. (It was vegan though- no dairy.) Poor Phoenix was asleep and missed out.

At one point Johnny started reading all the stuff they have there and said something about how awesome it was. Sebastian made me laugh with a very enthusiastic agreement he gave. I can’t remember now if it was just, “Yeah!” or “Yeah! It’s awesome!” but the way he did it was kind of comical.

Tristen and I strapped the boys in and went for a walk early Sunday afternoon. We might have gone farther than we did, but it was pretty hot and we hadn’t put any sunscreen on the boys’ legs, which were sticking out from the carriers.

My parents arrived not too long after we got back and I took a quick shower. We hung out for a little bit then packed everyone up in Nikki (our Kia Sorento) and headed off to Laura and Craig’s for the cookout with one quick stop to pick up some lines for Laura.

Tristen pointed out while we were on our walk that we probably wouldn’t have to worry about the boys much for the afternoon, and she was right. Between two sets of grandparents and so many friends, they were passed around and held plenty.

There were probably 35 to 40 people there, all told. Us, my parents, Tristen’s parents, Torrie, Johnny, Bash, Sam, Berkley, Curren, Jenna, Steven, Olivia, Edy, Ryan, Janessa, McKenzie, Em, Dina, Dani, Aaron, Logan, Josh, Mary, a college friend of hers and Laura’s, Susan, Mark, Larissa, and a guy we didn’t know who was friends of one of them I think. I’m sure I’m missing someone, but that’s a pretty exhaustive list.

There was so much food. Craig did some barbecue and hot dogs (which I combined along with baked beans- that’s my thing now) and Steven brought chicken, corn, and sausages. There were plenty of sides and desserts, too.

We had a very good time just talking and hanging out. I left sometime after 7 with the boys, my parents, and Johnny. Tristen and Torrie stayed behind to clean up like the dutiful daughters they are. More help for that was offered, but they insisted they had it. The boys definitely needed to get to bed anyway; Phoenix did a good bit of crying on the way home.

Once they were down we put on a football game- #8 Miami vs. #25 LSU. I was slightly pulling for Miami just because they’re an ACC team, but then I remembered how they really screwed Duke a couple years ago and decided I didn’t really care. Dad decided to go for LSU as an SEC team. LSU looked outmatched and as though they were getting lucky early, but they had a 33-3 lead late (which ended up 33-17).

In other football news, Duke beat Army 34-13 Friday night. I meant to watch it, but I worked until about 1 AM finishing up a project.

Torrie dropped Tristen off eventually. My parents went to bed then we did to not too much later.

Actual Labor Day 2018 started off with a baby milestone. The boys have been sleeping really well lately, waking up only once to eat more often than not this past week. Last night, however, THEY SLEPT THROUGH THE ENTIRE NIGHT! 7:45 PM to 6:40 AM. It was a beautiful thing. I’m not expecting it to be 100% consistent yet, but here’s to hoping.

I mean, they didn’t get s full final nap and they had a lot going on to the previous day, but I think there are times Fawkes might have slept through the night if he we didn’t get him up to feed him when Phoenix woke up to eat. We’ve also been giving them some baby oatmeal for their pre-shower dinner, which might be helping to fill them up.

Anyway, we’re very excited about it.

Mom and Dad were ready to hit the road, but I convinced them to have breakfast with us so we went to Cracker Barrel. Unfortunately for Mom, her pancakes were kind of cold and felt a little mushy, and it took them too long to get that replaced. The boys were getting restless, so she had them just take them off the order.

We have Fawkes and Phoenix some apple sauce packs which they are pretty much entirely on their own, so that was another nice milestone. They’ll need to be supervised with them, but it’s greatknowing they can suck those things down pretty well already.

Dad and I took the boys outside while everything was getting settled and I trounced him (sorry, Dad, but it’s true) at a game of checkers.

We said goodbye to our chihuahua, Duke, in the parking lot of the Cracker Barrel. Erin’s going to be taking him for now. It would be one thing if we had Milly more often, since she plays with him some and likes to have him sleep in her bed with her, but we just don’t have the time or energy to give him much attention right now. It was also different when we had Elmo here too, because he’d cuddle up with her and didn’t feel lonely every time we left the house. As it is, we get alerts on the baby monitor when he cries when we’re gone.

Milly FaceTimed me this evening and she almost cried when I told her, but we think he’s better off with Erin, who loves Duke and has long called him her boyfriend.

Speaking of Milly, she was at Topsail with Amanda’s extended family, as she is every year. It’s hard to get her to talk a lot about anything (unless it’s Mincraft), so all I really got is that she played (Minecraft) with her cousin Kayleigh (sp?). (Technically her maternal grandmother’s cousin’s daughter, which is, what, her third cousin three times removed to the hypotenuse of of a rombus times pi squared, or something along those lines?) she also made a sand Loch Ness monster named Shelly with her Nama and Uncle Michael. And she and her friend across the street made slike this afternoon.

Her brothers, who were in the process of skipping nap time, really enjoyed seeing her face.

We were invited to go hang out at the pool today, but it was nearing nap time when we would have been out there and Tristen and I were both feeling kind of apathetic. We did get out for a little bit though- we got s few groceries from Harris Teeter (mainly because we needed to refill our water jugs) and some baby formula from Target (because Costco has the audacity to give their employees the day off on Labor Day).

Outside of that, we mostly watched Parks & Rec, which we rather randomly decided to watch from the beginning a few weeks ago. It became our “what we watch while feeding the babies” show and since I enjoy working through one show at a time when possible. It’s mostly all we’ve watched for a bit.

When it was on, I saw all but the last season and a half or so of the show and we’ve passed that. Actually, we only have two episodes left at this point.