Not much to talk about today. I met Amanda for lunch at Bear Rock Cafe at Independence Mall. As she was about to leave, Tim Henrich, our production manager, came in. He and I were meeting with one of the clients I was handing over to him. We both ended up sticking around until well after the meeting, which didn’t take very long, to do some work.

After work, Amanda and I went over to Anna and Barry Frazelle’s. Karen Mercer, my mother-in-law, was there watching her today. Anna is doing well, although she came down with a pretty bad rash from an allergic reaction. They had a whole lot of food from all of their frieds helping them out, taking care of them and all, so they had us eat some. The macaronni we ate had cottage cheese in it, which was actually quite good.

Barry worked a little late, Hannah was out with friends and Kirsten was at a swim meet. Karen did a bunch of yard work all day; she mowed the yard and trimmed a bunch of bushes and flowers. I noticed that the with house next door to them, a number of doors were open, so I decided to check it out. It should be noted that the house was sold a few months ago to someone who was going to knock it down and build another house. They then decided to turn around and resell it a few weeks later for several hundred thousand dollars more than they paid for it. 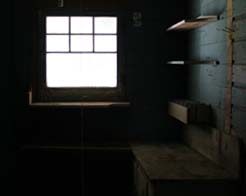 I really like the house. The basement, well, downstairs, since people on the beach don’t have basements for a very practical reason, was really old. It put me to mind of houses I’ve been in that were much older than the 1920’s or 30’s when this house was bulit. I’d really like to take some pictures of the interior before someone does actually knock it down. The upstairs seems even longer on the inside than it looks outside, and it seems that just about every bedroom and bathroom flows into another room. The master bedroom is the size of a… I don’t know what. It’s friggin’ huge. The front of the house is all hardwood floors and celings. The foyer used to be part of the front porch. You can tell because it’s still got a place for the door and windows and it’s got exterior shingle siding on the wall. It’s a great house. Definitely needs some fixing up, but someone could do a lot with it.

Amanda was in a hurry to get back home as the dinner wasn’t sitting in her quite right. Unfortunately, we caught the bridge heading off Wrightsville. There was a barge that needed to get through and they stopped traffic long before the barge got to the bridge. I think we were stopped for literally five minutes before we even saw the lights of the barge. Barry was right in front of us, on his way to pick Kirsten up from PT’s Grille. I had time to get out of the car and walk up to Barry’s car and have a conversation with him. We eventually got across the bridge, much to Amanda’s comfort.