Amanda and I met Ben and Jessica Lambeth at Sonic to pick up some dinner to take to Carolina Beach. Ben drove us all down there in his Jeep because, you see, at Carolina Beach you can drive your car out there and camp or just hang out. So the girls piled into the back of the Jeep while Ben and I rode up front with the windows unzipped. I remarked as we were leaving Sonic that it felt like high school. You get together with some friends, grab some food and go to the park (or the beach in this case) and just hang out for the evening. 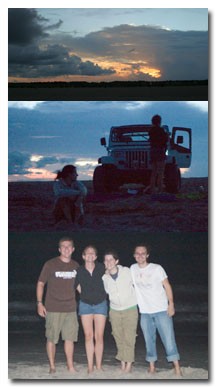 Jessica wanted to pick up supplies to make s’mores on the way, but it proved impractical since we didn’t have any lighter fluid to start a fire or anything to cook the s’mores on. Just about every gas station had cords of wood for sale, because people like to go camp out on the beach.

We got to a spot on the beach and climbed out. I took a few pictures and we all ate then played a round of team Bocce ball. Team Mersey won. (I was calling me and Amanda team Dotsey, she wanted to call it team Mercer, just to mess with me, so we ended up on Team Mersey.) By the time we finished our Bocce game, it was getting dark so we just sat on blankets for a bit and looked at the stars. We even saw a couple shooting stars.

I mentioned to Amanda that I couldn’t make out any of the few constellations I know so she made up a constellation for Bruce. Of course, it ended up taking up almost the entire patch of sky above us. Constellation Brucus she wanted to name it. She then wanted to make a constellation for Mr. Cobblepott, but there wasn’t enough sky left. I saw a triangle of stars off to the northern horizon and named it Moo.

Overall the night was nice, fun, and a little romantic.

After sitting around a little while we played some Spades. Spades is one of those games I can never remember exactly how to play. Yes, I know it’s easy, but I’ll probably forget all the rules by the next time we play it. Despite that obvious handicap, Ben and I almost beat Amanda and Jessica. It came down to the last hand. We were terribly behind before, but Ben bid a blind nil and I ended up bidding a nil, and both of those helped bring us back.

After the beach we headed back to Sonic for some shakes. As we were sitting there waiting for our food, we noticed the downside of an outdoor eatery in the Port City, namely an increased population and visibility of Palmetto bugs (pronounced “Palmetta” if you’re a true local), aka huge-ass roaches. I killed a few that got a litle too close to us. Here’s the thing though; I hate feeling that crunch when stepping on them, so I threw my sandals at them (with deadly accuracy I might add).

As we were getting ready to leave, I got up and noticed that there was a big black mass on the ground behind me. It turned out that one of the roaches I’d killed was being entirely devoured by ants. The body was a pulsating black mass with a thick black line trailing away beyond the pavement, presumably to a very happy colony of ants. Ben and I were fascinated. As we were haunched over, hands on our knees, Ben remarked, “There’s nothing like watching ants eat a dead roach at Sonic.”