Hot Damn, We Watch Too Much TV

Hot Damn, We Watch Too Much TV

Today was one of the most stressful work days I’ve had since Tim Henrich took over as Production Manager. I had about a hundred support issues (be they questions or minor updates), a bunch of sales proposals I was trying to get out and plenty of phone calls to make or return. I was so stressed that I actually didn’t do anything for lunch. Usually I eat in front of the computer or do some running around. Today I ate some ravioli and watched Tuesday night’s Boston Legal downstairs on the big TV. It’s very, very rare that I take any time out of the day like that. Even yesterday morning when I had Comancheros on I was working. 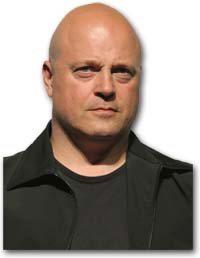 I got a lot done, but there’s still quite a bit to do. One bright spot to the day was that I was on the phone talking to a client of ours who is out in Beverly Hills and he had to go because Michael Chiklis (best known to me as Ben Grimm, aka The Thing from the Fantastic Four movie, but more well known for his role on The Shield, which I’ve never seen) came into the store. So, virtually speaking, I was very near a celebrity today.

Amanda brought home some Chick-Fil-A, which we seem to be eating on most Thursday nights now. After hearing how stressed I was about my day she offered to pick up a milkshake for me. Chick-Fil-A milkshakes are very good. She got me a cookies and cream milkshake with whipped cream and a cherry on top. She’s very kind.

We then proceeded to clean up the house since everyone was coming over for small group tonight. I showed Ben the pictures I took from this weekend and he had good things to say about a lot of them. (Which remind me, I told him I’d send him the link.)

Small group went nicely tonight I think. The only negative was that we’re watching a group study DVD and I accidentally played the long version of the sermon instead of the one geared towards the study and discussion questions so there was a lot less time for discussion afterwards. Oh well. Elliot and Melissa Clark came back again and were able to share some of their thoughts, so that counts as a plus to me.

Ben and Jessica Lambeth don’t have a whole lot of time left here. They’re moving to Winston-Salem soon, which makes me and Amanda particularly bummed since, if you’ve read much of this you’ll know, we do a lot with the two of them. Sucks.

The Office and My Name is Earl were reruns tonight so Amanda and I watched Smallville after everyone left. I read today that NBC is going to bring back their Thursday night comedy block. They’re going to have those two shows plus Tina Fey’s new show, 30 Rock and Scrubs all together. I think NBC is probably my favorite network right now, although from what I’ve read they’re last in ratings. They have the four shows I mentioned already, plus Heroes and Studio 60 (which two shows make me look forward to Monday nights), Boston Legal, Friday Night Lights, Law & Order: SVU and Saturday Night Live. That’s a big chunk of my regularly viewed programming. If they somehow got Lost, Smallville and Supernatural, they’d have pretty much all the shows I care about. Add CSI, CSI: Miami and Without a Trace and they’d have all the shows Amanda cares to watch too. Oh, and One Tree Hill. Hot damn, we watch too much TV. Oh, and How I Met Your Mother.