I’ve got this thing where a lot of times when Amanda says something, I’ll turn it back around on her or use it to tell her to kiss my ass. For example, she might say, “Would you give Bruce a bath?” to which I snappily reply, “Would you kiss my ass?” Or she might say, “The door is unlocked,” at which point I tell her, “You’re unlocked.” It’s great fun. So tonight I exaggerated that Elliot and Melissa Clark, whom we invited out tonight, were going to be at Wal-Mart all night. Someone (we were in the car, and Ben and Jessica Lambeth were with us) asked if I was serious, and I said no, that they had already made plans for the night, but they were indeed at Wal-Mart. Amanda said, “Going to Wal-Mart can be an all-night affair.” Without missing a beat, I told her, “You’re an all-night-.” At that point I realized what I was about to say and stopped myself out of propriety, although that didn’t stop me from laughing pretty hard. Amanda got this look like I got one over on her and she wanted to laugh, but was trying not to. Ben and Jessica didn’t hear the whole exchange, but once I told it to them they thought it was pretty funny too.

Work wasn’t as tough as yesterday, but it was still pretty busy. I had to go to the post office to pick up some two-cent stamps (I’ve got a bunch of unused thirty-seven-cent stamps) so I could mail off the mortgage check and, since my brother-in-law Michael Mercer got home from his classes right before I left, I asked him if he wanted to grab some lunch. We headed on out and after the post office we went to El Cerro Grande.

Apparently the service is generally fast at El Cerro Grande. We were waiting on our food for at least half an hour, probably forty-five minutes. For a lunchtime crowd, that is not a good thing. And it wasn’t just us; I heard the table next to us complaining that it had been half an hour since they’d ordered their food. We had a good time though. It was cold and rainy outside, and it was cold inside as well. Michael noticed that there was a thermostat on the wall at our table, so I switched it to heat. Once I did that though, we discovered that the temperature was set to 50 and somehow the thermostat’s thermometer was measuring between 72 and 74 degrees.

For the next half hour Michael and I took turns turning up the thermostat. It was an electronic push-button one, and the button wasn’t very sensitive so you could hit the thing six or more times and it would only go up two or three degrees. Eventually I went to the bathroom, and Michael said that while I was gone somebody came over and switched the thermostat off of heat. Our food was there too, and that at least seemed to give us some warmth.

After we got back I started catching up on work and Michael went home to Richlands. He and his ex-girlfriend Sarah Denning, are going to go see Saw III tonight. We saw the first one with them and they saw the second one together, so I figured it was mildly okay for them to go see the third one together. IF they’re going to be broken up though, and I’ve expressed this a few times to Michael so I don’t mind saying it here, they should act like they’re broken up. I don’t mean they can’t be friends, but if they’re separated, it’s for a reason and they need to give each other some room. The whole situation hearkens back to my Julie Powell time, and I just wish he’d listen to people who have been through what they’re going through. Then again, I didn’t listen to other people when I was going through it. I don’t think anybody ever does.

We went out tonight with Ben and Jessica. We went by Petco to look for a Hawaiian shirt for Bruce, who has apparently become the mascot for Tribute Properties for tomorrow’s Juvenile Diabetes walk. He’s supposed to have a shirt of some kind. We couldn’t find a Hawaiian shirt, so Amanda got him a gray running jacket with a hood. I’m sure it’ll be very cute.

Speaking of the JDRF, the weather is supposed to be nasty tomorrow morning. I’m really looking forward to being at Greenfield Lake at 8:00 tomorrow to walk in the rain.

After Petco we went to Hollywood East Cinema Grill. Being a cinema grill, it’s one of those theaters where you watch a movie while they serve you dinner. It was 6:30 so we were going to see Invincible (they show second-run movies) with Mark Wahlberg. That was sold out (small theaters) so we got tickets for the 7:30 showing of Superman Returns, which is what I really wanted to see anyway. Unfortunately we had an hour to waste, so we went over to Pottery Plus or whatever the name of the store is.

Generally I hate going to stores like that, but it was actually kind of fun. Ben and I were mostly goofing off and annoying the girls. They sell cassette tapes there by the way, and they have the audacity to sell them for $2.99. There was an aisle with mirrors, which reminded me of how conceited I used to be. There was another section with a bunch of vases and such, many of them with very narrow tops. Ben was blowing in them, trying out each one. I did a few myself. The tonal range from one vase to the next was really quite impressive. There was also a green Styrofoam thing in the shape of a ring that I wore around my head for a couple of minutes. Amanda tried to convince me that it left a green line on my forehead.

Between messing around in that store and messing with the thermostat in El Cerro Grande, I kind of feel like I was back in high school today. 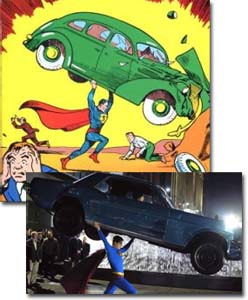 I liked Superman Returns. There was a good number of shots of him just doing cool things, like walking through a hail of gunfire, stopping extremely massive items from falling and crushing people, just generally flying around; a good bit of that sort of thing.

They messed with the mythos a bit, particularly in having Jonathan Kent, Clark Kent’s adoptive father, dead (although the TV show Smallville did the same thing last season), not to mention giving Lois Lane a fiancee and a kid. There is another item which I won’t go into, although I wonder what kind of effect it will have on a sequel.

Overall I liked Superman Returns. There’s plenty that could have been worked on, but the movie did go in directions I didn’t expect it to, some of which were pleasant surprises to me, who thought it’d be a pretty predictable story. And it had enough fanboy moments to kept me happy. One thing I liked in particular was a photograph of Superman holding a car that was a direct homage to Action Comics #1 (Superman’s first appearance).

The St. Louis Cardinals just won the World Series. Congratulations to them. I have never been able to get into watching baseball on TV, although I enjoy going to games.

I really hope the weather is decent tomorrow. The wind is blowing pretty hard right now.