Amanda and I woke up early today. She started off taking a shower, I took care of all the animals. I went to clean out the kitty litter box and, since we’re going to be gone a few days and we weren’t totally sure exactly when someone else would come to clean it out I filled up an older litter box next to the new one. As I was doing that, Mooo! got into the newer one, the one I had just cleaned out, and peed. As I was scooping that out, Cobb got into the other one and did his business. Then, as I was about to head to the bathroom, I saw that one of the cats, most likely Cobb, had thrown up his food. We overfilled the bowls since nobody would be around this evening to feed them, and I’m guessing they gorged themselves. Also likely is that as soon as we left, Mooo! ate all of Cobb’s food. Cobb eats specially medicated food to prevent urinary tract infections.

Amanda wanted to get a muffin and a coffee from Dunkin Donuts when we left, and since that’s just inside town we went by there to get some, but it was closed. We just stopped by a gas station on the way back out of town and picked up some foodstuffs and some drinks.

There was quite a bit of flooding in the eastern North Carolina region. At one point we passed a part of the Cape Fear River and I was amazed at how swollen it was. But after we passed it, I noticed I was still looking at water through the trees. Then we got to a field and there was still water. Several of the roads we passed had flood detours. Fortunately we just happened to be on a flood-free path to Richlands.

We got to Richlands then left a few minutes later to head out to Greenville with my father-in-law Phil Mercer driving his wife Karen’s van. Amanda, Michael and I all sat in the first bench back. We’d have spread out a bit, but Michael brought his laptop so we could play Risk 2 on the computer. The computers beat us out but Michael wasn’t feeling well enough to do another game so I played one. We got to Greenville before I finished, but I did ultimately win the game.

In Greenville we went to see Phil’s aunt, Sarah Bolin. Amanda and Michael call her Grandma Bolin because Phil was orphaned though she couldn’t take on Phil and his two sisters, she watched out for them as she could. When we got to the old folks home where Grandma Bolin is living, Phil’s sister Ona and her family, husband Peter and sons William and Stanton, were already there, along with Phil’s cousin Roosie and his girlfriend Donna. Amanda’s cousin Abby and her husband Brad got there with their little boy Connor and their new baby Declan, eighteen days old, got there soon after. Connor was very shy, but smiley, and Declan had quite a head of hair on him. Amanda said he looks like a little Chad Michael Murray. Abby said it was like that or a little Rod Stewart.

We got to the K&W, where we have the traditional Greenville Thanksgiving lunch. Grandma Bolin used to make the Thanksgiving meals for everyone, but she’s just not able to anymore and she doesn’t want anyone else to have to do it. So she takes us all out to K&W. She was sounding stronger than the last time I saw her, which is good.

There was a really long line outside the K&W and it was really cold. It took about an hour to get all the way through the line, and half of that was spent outside. Someone had the idea to get there at 11:30 to beat the crowd, but apparently it was such a good idea that everyone else thought of it too. At 12:30 when we were nearing the end of the line, there was nobody waiting outside anymore. While we were waiting in line (after we’d gotten inside) Roosie’s other kid, Robert and his girlfriend joined us. 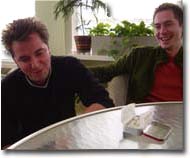 After K&W we went back to the home and sat in a sunroom. After the big meal we were all pretty tired. Stanton passed some Altoids around and for some reason we started offering people money to eat all the Altoids in the container at the same time. We started off offering between $5-$10 to Robert, Phil ate about five or six of them, then we started trying to get Michael to eat the whole box for $150. He almost considered it so, as he later told me, he could buy a Nintendo Wii. After haggling with him, Stanton picked up the box and, we thought, started counting the Altoids. Instead he just grabbed a handful and chucked them into his mouth. He started turning red after a while. There’s a laxative warning on the container, so I hope he made it safely and cleanly back to Chapel Hill.

William found a marble and started messing with it. Michael and I came up with a new game called Wimble. We were sitting at a round table with a slightly raised lip on it. Underneath there was some framing holding it together, so the goal was to blow the marble from your side to your opponent’s side in between the area designated by the under-framing. If the marble hits the edge of your opponent’s side you get one point. If it goes over the side you get two points. We also added the stipulation that if you touch the marble you lose a point. I won, but we were both light-headed afterwards. The toughest part of it is that it’s hard to blow really hard when you’re laughing.

We left not long after that and went back to Richlands, then we went on to Beulaville to see Amanda’s grandparents. I called my dad on the way there and while it was nice to talk to him, he had a lot of news that wasn’t so great. His dad, Pap, is getting pretty weak. He fell the other day on the way to the car to go see a doctor. I don’t think he hurt himself in the fall, but Baba (my grandmother) can’t help him up so she had to call the neighbors. On top of that, Baba’s sister, Aunt Beth, found out that she has cancer. Jack Hanley, a guy I’ve always loved and respected, has prostate cancer. One bright point is that John Quinn is doing well and is home from the hospital.

After we got to Beulaville I talked to Mom for a few minutes. She was on her way to Gastonia to pick up Jackson and bring him home. That’s great because it means me and Amanda will get

to spend a lot of time with him tomorrow. I also called Pap, who was home by himself. Baba had gone to Uncle Steve’s and Pap, as he said, was “Bachin’ it.” He sounded okay, stronger than he was a year or so ago, but not as strong as I’d like to hear him. We discussed his knees, and he said he could undergo knee replacement surgery, but because of blood clots and such he was a high risk. They’d do it for him if he wanted to though. What a tough call to make.

The Frazelles got to Beulaville after a little while and we ate. Hannah and Kirsten were fighting each other pretty much all night. Not really fighting, but just messing with each other. The things they did to each other and the places they hit each other- well, they fight dirty is all I’ll say. They were entertaining nonetheless.