I showed those designs to Amanda today.  She wanted to see a black version, so I whipped that up, then she thought there should be some color in the header, so we added some blue.  Then I added the little flourish and fixed the site name.  She hasn’t seen a few of the modifications yet.  This is what I’ve got so far. 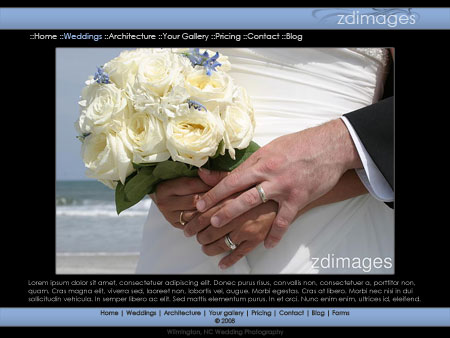 We were out of cereal this morning and I wanted some, so I decided to run by the grocery store real quick.  Life and Cinnamon Toast Crunch were both on sale so I decided to get one of each of those.  When I got to the checkout lane though, I discovered that I couldn’t find my check card.  I realized pretty quickly that I’d left it at O’Charley’s last night.  I gave them a call and fortunately they had the card, so I ran by there and picked it up.  The person who answered the door there (because it was early and the place wasn’t open yet) was this really tall waiter guy that had served Amanda and I a couple times.  I thanked him for the check card and told him that Amanda and I had always thought he was a good waiter.

Then I went back and purchased my cereal.

Scott and I took some time today to go over a number of tickets that were sitting in the maintenance and design departments and took care of those- whether it was following up with someone, sending out a bill or finishing up a lingering item that we were pretty sure about but hadn’t gotten feedback on.

Anyhoo, after Amanda got home from work we went to the grocey store to get stuff to make dinner for Seth and Dana Holloman, who were coming over tonight.  They got here right around 7:30 and dinner was ready shortly before that.  We had bar-b-que chicken, green beans, baked beans and salad.  It was quite a nice dinner.

After we ate the four of us just hung out in the living room.  A lot of the talk was Duke-related, at least betwen me and Seth.  We’re both looking forward to seeing what the Blue Devils can do in football this season, and we’re of course really looking forward to the start of basketball season.  We also compared iPhone aps and he showed me and Amanda a bunch of pictures of their son, Gavin.

We played Rock Band after a while.  Seth started out singing- he had even said in a message on The Devil’s Den (a Duke message board I frequent- a lot) that he was warming up his vocal cords, but it turned out to be to no real avail.  He’d been a little sick recently and his throat wasn’t up to snuff, or at least that’s the excuse he gave for failing out of a song on easy.

We had a good time though.  They took off around 11:30 and Amanda went to get ready for bed.  I’ll be joining her soon, I think.