Zach Dotsey on The Bachelor

Zach Dotsey on The Bachelor

So here’s something old that’s new again: Amanda’s back to sleeping on the non-wall side of the bed.  She used to always sleep “closer to the door” but back when she had her surgery we were afraid of Harvey accidentally jumping on her while jumping into bed, so she started sleeping on the side further from the wall.  Last night Amanda decided to switch back, which means I now have to climb over her when I’m getting in bed.  I honestly don’t really care which side of the bed I sleep on, although I think I tend to gravitate towards the side she’s now on in the mornings.

I had a somewhat busy morning at work today.  I had a few updates to do for one client then answered a number of questions for another and capped it off with a conference call to a prospective client, which I felt pretty good about.

Amanda watched last night’s Bachelor after she got home, since there was nothing new on tonight that we watch, then we watched this weekend’s Saturday Night Live before doing a little reading.

So, I don’t watch The Bachelor, but I’ve been around it enough to get a feel for it.  My main feeling about it (and The Bachelorette) is: How can you expect to find love on a realty competition TV show?  I mean, really.  You meet someone, battle for a few minutes with someone then after a few weeks decide you’re in love and want to spend the rest of your life with this person?  I have the feeling that most of the people who go on shows like that do it to further their own agenda- namely getting famous on TV to try to parlay it into something else in their lives.

That said, I’m sure people do end up with some real feelings, even if those feelings are fueled by the whirlwind fantasy life of it all.  Exotic locations, crazy dates most people could never go on in real life, the competition involved.  Anyway, in tonight’s episode they narrowed it down to two ladies.  (The one Amanda thought was the best for for the guy went home.)  That got me to thinking about how I don’t think I could ever be on a show like that.

I mean, obviously I could never make it on a show like that anyway.  I’m too short, I don’t work out enough and I don’t make enough money.  Oh yeah, there’s that whole “being married” thing too.  But aside from that, like I said, I think people do develop emotions, and I don’t know if I could stand hurting people the way they do on that show.  On top of that, when it comes to emotions, I’ve always just sort of winged it- that is, I don’t think I ever really think out emotional decisions in a way you’d have to on that show.  I mean, when deciding to ask Amanda to marry me I had to consider a lot of things, but I knew it was what I wanted to do and I was pretty certain we’d be happy together, and that’s all I really needed to think about.

Of course, the perk to it is that the guy pulled off a trifecta.  He slept with three women in three days, and his justification for it, which was stated in voiceover each time, was that he felt close to them and he loved them, but he had to see how passionate they were, or what they were like when it came to being intimate, or something like that.  Old Zach could have done that then sent one of them home with maybe an ounce of remorse, and I think that’s what’s really telling about the show.  They guy did something that I would have done back before the woman who would become my wife corrected a notion I had about women.  Then again, and I don’t know these women personally so I really can’t judge them, but maybe the alluded-to notions find justification in women looking for love on a reality TV show.

Holy crap, did I really just go off on that much of a tangent about THE BACHELOR?  Really? 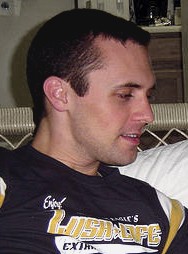 Let’s wrap this up then.  If Old Zach were on The Bachelor, yes, he’d have probably slept with (at least) the final three women, who all had the opportunity to go to the “fantasy suite”, but at the same time, complicated fellow that he was, he probably would have stuck with the one he chose for a while too.  However, it’s possible that he’d have been too wrapped up in having fun, and that the preceding weeks of unyielding attention and sycohpantism from over a dozen women would have gone to his head, endorsing the objectificitive (I think I just made up a new word) ideas of women that he had, causing him to be unable to happily settle down or hold a serious relationship for even longer than it took him to get over that stage in his life as it was.

I have no idea where all this speculation came from.  Maybe it’s that not much happened today and I felt like writing.  At any rate, I thank God that I never had such an opportunity and am reminded once again how much I love my wife.  Thank you, Amanda, for not meeting the expectations I had of women at the time we met.  Thank you for helping me to grow up.  Thank you for reminding me that many women do have hearts and depth and for helping me come around to being a better person as a result.

I hope the baby leaves your sciatic nerve alone, and hope that you’ll stop getting those inconvenient foot cramps.