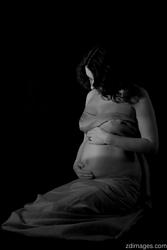 I really liked the sermon today. I felt like our preacher, Mike Ashcraft, was having an individual conversation with me. It wasn’t so much what he said, but how he delivered his message today. I got the feeling that I’d we were discussing things over lunch, he would talk much to me by myself like he did to me in a large crowd.

Jeaneal Guy sat next to us. I looked right through her when she first sat down though, and I felt a little bad about that. Her mom, who seemed very nice, was with her.

After church Amanda and I went by Joanne’s a shop that sells cloth and such.  We bought enough to make a white background and a black background to set up a homemade studio.  We also got some cloth to cover up important parts in order to take some maternity pictures.  When we got home we tested it out on Amanda, as you can see.

After a bit we went to Nick and Amy Warkentien’s house.  Nick had texted me a couple times this morning at church, and he waved at me from the video booth up on the balcony, but it was the first time we actually got to see the two of them since they left for Michigan to visit with Nick’s sister, Missy.  They thanked us for feeding Gipper and folding their clothes (they left in a hurry and Amanda took care of that while I scooped Gipper’s poo one time) then we watched Vicky Cristina Barcelona.  I suggested after watching it that Amanda and I should become artists and live a bohemian lifestyle.

We hung around for a bit and chatted, watched a little bit of a My Morning Jacket DVD then headed on home in time to catch the Duke vs. Wake Forest rematch.  Man, it was a good game.  Elliot Williams had several inbound steals and really didn’t play like a freshman who just got inserted into the starting lineup at the end of the year.  Gerald Henderson had a career high 35 point and Jon Scheyer had a career high 30 points.  As Kyle Van Zandt, a Wake Forest alum, later wrote on my Facebook wall, it was an NBA shootout.  Duke was up big in the first half but the Deacs clawed their way back and made a game of it.  They never took the lead, but they got it within two points a couple times before Duke finally put them away with a score of 101-91.  It was the first time Duke had scored in triple digits in a very long time in Cameron.

Coach K set the tone by coming out all fired up.  He even took off his jacket and was just… firey!  I think it really helped set the tone for the players.