I got up early this morning to go surfing, getting out to the Frazelle house at about 6:45.  I caught the bridge on the way over to Wrightsville Beach but I did get to watch the sun rise because of it.  I felt very happy on the way over.  I couldn’t find any music on the XM radio that I was feeling, so flipping around I came across some very happy and upbeat music from the 1940’s and listened to that for a bit.  I really was in a happy mood and thanked God for days like this.

We had a bit of a crew who all met up this morning.  I was there, of course, along with Michael Mercer, Barry and Hannah Frazelle, Christian Black and Brian… I can’t remember his last name right now.  Anyway, we all put on wetsuits and went out into the water, which wasn’t as cold as it was last time I went out.

We had some fun.  The waves were breaking pretty hard and Michael and I both had some impressive wipeouts, but we caught a few and enjoyed it.  After that I joined Barry, Anna, Hannah, Christian and Michael at Starbucks, where Barry bought all of us a drink and something to eat.  I had a caramel steamer and some lemon poundcake.  Yummers.

When I got back home, I think it was around 9:00, Amanda was painting the nursery and I mowed the yard.  It’s been quite a while since I’ve mowed and the backyard took me probably twice as long as usual, but it looks so much better now.

Amanda’s mom, Karen Mercer, showed up at the house shortly after I finished the yard and continued drawing and painting the nursery walls.  I joined the two of them after a little bit of rest.  I mean, having a surf session like I did then hacking my way through an overgrown lawn is tough work! 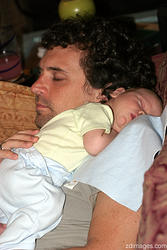 I think we’ve now got just about all the drawings that are going up on the wall done.  The three of us continued to paint until a little after 4:00, which is when Karen had decided she needed to take off.  She did hang around a few extra minutes, and Nick, Amy and Eli Warkentien showed up, so Karen got to meet Eli.

So Karen took off and the Warkentiens hung out for a bit before we all split up.  They went to do some necessary in-town shopping while Amanda and I made a grocery run.  We fixed macaroni and cheese with ham and green beans for a late dinner, which the Warkentiens joined after their shopping.  More hanging out ensued.  I think I was in and out of consciousness while Eli napped on my shoulder.