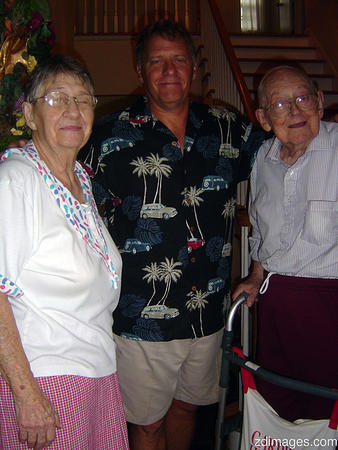 My phone rang and when I saw it was my dad I wasn’t expecting any particular good news.  Sad thing is, for the past year or more just about every time I see that my dad is calling I’ve expected him to have bad news.  Or really bad news.  When he called just a few minutes ago that was what I was thinking.

It wasn’t the worst news at least.  Pap’s still alive, but I don’t know for how long.  Dad said he hasn’t communicated with anyone for days, which I take to mean that he’s not even nodding his head or making any sort of indication of anything at all.  He also said that when they move Pap his eyes flutter a little, but that’s it.  His body’s been giving out on him over the past year or two, and it sounds like his body is just about done giving him anything at all.

Dad said that right now there’s a tube in Pap’s nose through which they feed him and give him medicine.  The options right now are to keep him in the hospital where they can’t do anything for him, put him in a nursing home (which Baba, Dad said, is vehemently against) where they’ll want a permanent tube put in or they can put him in hospice with no tube at all, meaning he’d likely starve, although Dad said he was told that at that point the body’s not really doing a whole lot and it wouldn’t exactly be starving him.  That’s a gross paraphrasing.

I asked Dad how Baba was about it, and he said she’s doing pretty well.  Pap’s been in and out of nursing homes and hospitals for a while, and he hasn’t lived at home since January or so.

I guess it would be best if Pap were to just go ahead and let go, but, and here I am being selfish again, it’s just such a terrible time for it, not that there’s ever a convenient time to die.  I can’t stand the thought of not going to one of my grandparents’ funerals, but even more than that I can’t possibly miss Milly’s birth.  I was really hoping to have him meet her, too, and to bless her like he always blesses us when we visit.

I hope, for a few reasons, that he doesn’t die for a while yet, but at the same time, why prolong everyone else’s waiting and suffering?  So I can avoid some anguish of my own?  Is it too naive to hope he gets better again, even at a diminished capacity in his standard of living?  I believe in miracles, but he’s lived a good, long, productive life and has been suffering this breakdown in health for a while, so would it even be right to want him to get better?

PrevPreviousWelcome to the World, Lauren Elizabeth Nowak!
NextVisiting with BabiesNext