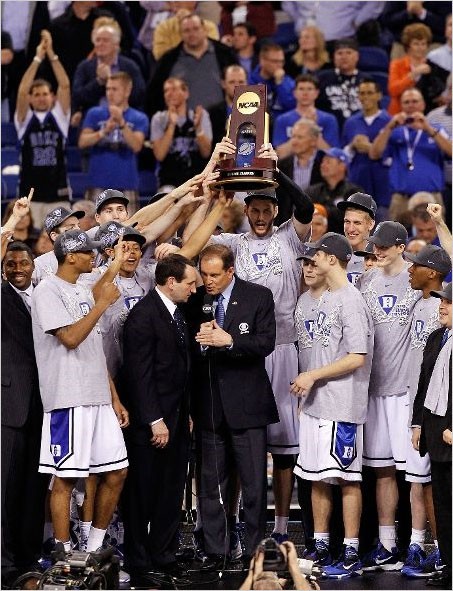 How can I go to sleep right now?  I’m so wound up about my Blue Devils winning their fourth NCAA championship!  I could go on for pages about how sweet it is, about how great it is that the seniors who went through some really tough years came together and went out as the top winners in the game, or about how awesome it is that Nolan Smith got to win a championship in the same city that his deceased father did exactly 30 years ago, or about how at almost every round of the tournament Duke was picked to lose, and how this team was supposed to be weak and unalthetic.

But you know what?  Duke did it.  They won the championship.  And now Milly not only lives in a world where the Tar Heels have never beaten the Blue Devils, but she also lives in one where only Duke has won the NCAA championship.  How beautiful is that?  (The answer, in case you’re not sure, is “very.”)

And what a game it was!  Butler, the underdog (though I refuse to call them a Cinderella since I think their lowest rank all season was at #12) played some strong defense and had outrebounded Duke in the first half, leaving the Blue Devils with just a one point lead.  There were several lead changes throughout the game and the margin never got past six.  (Which was Duke’s largest lead.)  It came down to the final possessions.  Duke missed some opportunities to put the game away and then Butler got within a single point.  They had a chance to go ahead but Brian Zoubek played some great defense on Butler’s star, Gordon Hayward and made him take an off-balance shot, which Zoubek rebounded with 3.6 seconds left.

Zoubek was fouled and hit the first shot then intentionally missed the second.  Hayward got the ball and put up a shot that was really close to going on.  But it didn’t, and now Duke is the national champion.  61-59, the first time since February that a team scored more than 60 points against Butler, who had a 26 (or 25?) game winning streak going.  Suck it, haters.

Kyle Singler got the Most Outstanding Player award and said he’s not decided on whether he’s coming back or not next year.  Nolan Smith has already said he could.  He said he thought there was a special group coming in next year and that he’d like a chance to repeat as champs.  Gotta love that attitude!

Amanda had watched the first half on the couch, half-conscious and still sick.  She actually stayed out of work today, and her voice has yet to come back.  During the half she decided to go upstairs and watch the game in bed, where, from time to time, she’d clap or bang on something to show excitement or nervousness.  At the end, when I went upstairs, her heart was beating as fast as mine.

I did a lot of jumping and running around, not to mention just spinning around.  A fourth national title for Coach K and Duke!  Coach K is now tied for second most titles ever with Adolph Rupp.  (He’s not likely to catch #1, John Wooden.)  And most Duke fans thought next year was going to be a possible title contender.  Not until late in this season did most people have any serious thoughts about Duke getting to or going past the Final Four.  Most Duke fans early in the season (myself included) said they’d be happy with just getting past the Sweet 16.

Anyway, I’m so happy for the seniors on this team.  They went through some really tough years and lots of criticism (though not from me), and because of that, I’m really happy for them.  They deserve to go out on top.  Very few players get to end their careers with a win, and I’m glad Jon Scheyer, Lance Thomas and Brian Zoubek could do that.

After the post-game coverage I rewound the DVR to the end of the game and re-watched that a few times, all the way through to the new Jennifer Hudson version of One Shining Moment.  And I’ll admit my eyes stung a little watching it.  I’m just so happy!

I suppose I could type all night about this, but it’s getting really late and I need to get to bed.

On the rest of the day, I did get some work done, despite being very mentally distracted, all while pretending Amanda wasn’t here.  What I mean by that is that even though she took the day off of work, she was sick and so I didn’t pass Milly off to her.  Milly was good for me, and when I fed her I put a Duke bib on her that is way too big.

That made me think about how I can’t wait to buy a national championship shirt!

Okay, off to bed for reals now.