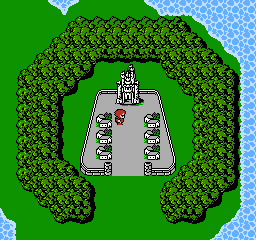 Last night I had a hankering to play some old Nintendo games, so I downloaded an old school Nintendo emulator and a few ROMs of games I used to own.  I loaded up Final Fantasy I tonight.  I first was introduced to Final Fantasy probably in seventh grade.  I used to go to my grandparents’ house after school and Pup Pup had a Nintendo hooked up to his computer monitor.  Anyway, he had the game and I played it there then I think he let me “borrow” it and I played it at home.  I spent a good number of hours on that game, though Pup Pup also gave me a strategy guide for it, which really helped out.  Unlike in later versions of the game, you’re not given stats for any weapons or armor, and you’re not told what characters can equip which items, so there was a lot of pointless guesswork that went into playing it.

Anyway, I think it’s funny that I have the latest and greatest in video gaming technology, and here I am playing an 8-bit game with MIDI music.  I showed it to Amanda and she actually laughed, knowing what Final Fantasy games look like now.

Also last night, I saw a, let’s just keep it generic and call it a bug, crawling on the wall next to me.  The bug spray hadn’t killed it yet, and though I knew it was likely to die very soon anyway, it was sizable so I didn’t want it to get away.  I didn’t have anything like a shoe on hand, so I grabbed a piece of paper and smashed it with that between it and my hand.  The piece of paper- our Pestco bill.  Just thought there was some irony in that.

Milly’s done some really cute things lately.  A couple days ago I walked by her and saw that she was sitting on the floor pulling wipes out of their box on one side of her with a pile of wipes deposited on the floor on the opposite side.

In the mornings I give Milly her bottle then eat a bowl of cereal myself.  She usually finishes before I do, but she finds something to entertain herself.  This morning, entertaining herself meant figuring out how to open the bottle of puffs.  The container was sitting on the floor next to her and she was reaching in with her finger and thumb and plucking them out one by one to eat.  It was adorable, and I wish I’d gotten a video or picture.

Then tonight I was in the office with her while Amanda made dinner.  We have three little bins that we keep various toys in- one in the nursery, one in the living room and one in the office.  I glanced over at her to check on her and she was leaning over the little bin as if studying what was in it and what she wanted to play with.  The next time I looked at her she was sitting in it.  I called Amanda in and we tried to get a picture, but she got out too soon.